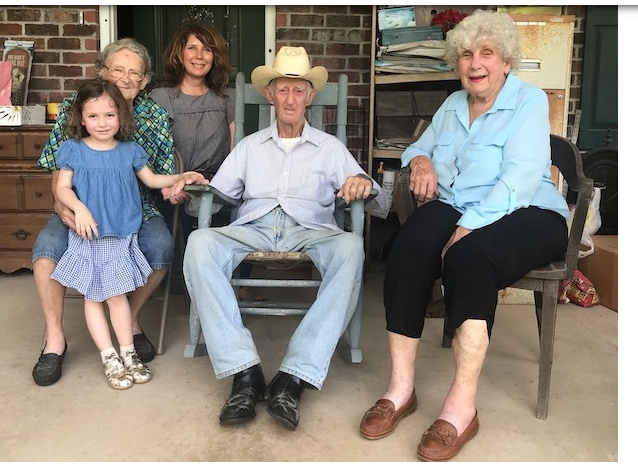 American Press
Evelyn Carlton Gearen could have been anything she wanted to be. Today, at 97, she wants to be home taking care of her husband, Pete, who celebrated his 101st birthday June 2. Pete could never be more — or less — than he is — a genuine, honest-to-God cowboy who began riding at age 3.

“We used to herd cows all over this country, down to Cameron, Lake Charles, Kinder and East Texas along the Sabine,” he said.

“We got up in the morning, saddled up and rode. That was before folks loaded horses in trailers and drove them to where they’d be working, when horses ran wild around all over these woods and when cows were still free range,” he said before leaning forward and spitting off the porch with neat precision.

“Pete’s grandpa, Rufus Gearen, took him to raise right after he was born,” Evelyn said.

He still has the sinewy look of a bronc buster, and he can’t remember how many horses he has gentled over a lifetime. Many for free.

“Whew-eeee,” he responds to the question. “I have no idea, but I do remember the most I ever broke in a day was four. Now, I’ve had some that jumped all day and I couldn’t break ‘em in a week.”

He’s messed up vertebrae in his neck, broken bones and got back on. He’s had a horse go down on him 20 miles from home. He was in his 70s when he broke his last horse. About 10 years ago, he sold his last horse. None were ever named, not even his favorite “ol’ dun.”

“I was on her working cows in Cameron and somebody from the Crain family told me to name my price for her and I knew I could have asked as much as I wanted, but I didn’t. I knew then I’d never own another one like her and I didn’t.”

“Pete could look at a horse and tell what it had in it,” Evelyn said. “He’d train them where they’d obey the lightest nudge, tap or squeeze of the knee. Horses are smart. Sometimes I think they have more sense than some people,” she said.

On April 4, 1925, Evelyn was born to Dr. Arthur Leslie and Dulsini Nelson Carlton. Not originally from the area and educated in Kansas City, her father was hired by a local sawmill to care for the workers and their families — as it was done at other major sawmill locations. Her mother, Dulsini Nelson Carlson, was named for Eveylyn’s Aunt Sini, who was the first visitor to come and hold the baby.

“That was the custom for naming babies in our family,” Evelyn said. “Whoever came to the house and walked it around first determined the baby’s name. Mother was the oldest of 12 children. Her mother died when she was 15.”

Evelyn’s mother raised her siblings, kept them fed and clothed, making all their clothing from bolts of cloth her father would bring back from town. She cooked for and fed the teacher her father brought to the community. She didn’t have time to go to school but learned to read by asking her younger siblings to show her what they were learning at school.

“She taught herself to read and write by first learning her letters. If she didn’t know how to pronounce a word when she was reading, she would spell it out. When she decided she wanted to do something, she did it,” Evelyn said.

This unshakeable determination to make a plan and stick to it is a trait she passed on to her daughter.

“Daddy was a friend with a vet who came and helped him treat the cows every so often,” Evelyn said. He’d bring an encyclopedia just about every time and I couldn’t wait to get my hands on it.”

Evelyn’s father sent her mother’s youngest sister to college. Her mother wanted him to send Evelyn.  Later, Evelyn would pay for her brothers to go to college.

“I had my goals set, and I think they finally realized I was the kind of person who was going to work hard and make it whether I went to college or not,” Evelyn said.

Her second interview and first job was working at the DeRidder Army Air Base.

“I took the Civil Service test at Fort Polk when I graduated from Singer High School,” she said.

“I don’t know what I scored, but they did tell me that I scored higher than anyone ever tested,” she said.

When the  base closed, only Evelyn and five firemen didn’t get pink slips. They kept her on to hire civilian workers in case the base reopened. The workload didn’t suit her. She liked to stay busy, and cashing what she considered an easy paycheck bothered her when she thought about the young men losing their lives fighting for their country. She was there for five years.

“I decided I’m gonna get me a job where I work,” she said.

She found out that the books needed straightening out at a local funeral home, so she told the owner she’d straighten them out and then train her replacement. That’s all. She ended up staying there 30 years. She was gratified by work when she helped someone going through a rough time, especially if she was able to share news of benefits to which they were entitled of which they knew nothing about.

“It’s not how a man looks, dances or dresses,” she said. “You’ve got to be interested in the same things.”

She knew Pete. Most people did. Her family had cattle. Pete had worked at her parent’s place and her uncles had worked with him at other locations. That’s what people did back then. They helped each other, she said. It was perhaps her non-romantic view of the cowboy that attracted her.

“I wanted to find someone who would work,” she said, “and when I did see Pete he was always working. I dated other men, soldiers. You had to be careful with soldiers because they’d lie and tell you they came from a rich family. One man I dated wanted me to go back with him to Waco to prove that his family had money. One man I dated loved to take me to Beaumont to eat dinner and hear music. That didn’t impress me. You can’t do that all the time. You’ve got to work and entertainment, that’s something you just fit in when you can. I knew if I found someone who would work, we would have something.”

She had purchased 20 acres of land and bought an automobile before she married Pete. But she hadn’t saved quite enough to purchase Beauregard Abstract Company when it became available.

“Mama said she hated to see me use my savings and go into debt,” Evelyn said. “But I won’t stand in your way, she told me.”

Pete gave her his blessing.

“I had never done that kind of work, legal work, but I’m the kind of person who thinks if someone else can do it, I can learn. I may not be as fast but I could learn to be. I was determined. I can’t fly an airplane, but if someone had ever challenged me to fly one and was willing to teach me, I would have taken them up on the challenge.”

She was 39. It was the 1970s. Beauregard Abstract was founded in 1913, and has documents on file of the first land grants/patents. The family who sold it to her let her know it wasn’t the easiest work to be had. They blamed their father’s death on the job.

“Anybody can do anything if they’ll just put their mind to it and work for it,” she said. “If you don’t work for it, sweat a little for it, you’ll never appreciate it.”

She described her new business as work that had to be accurate because people depended on her and trusted her. On occasion long hours were involved. While others slept, she might have to work to meet a rushed deadline of an attorney or someone who needed the information to get a loan. There were times she worked for folks and never charged them, if she knew they were hard up for money. She once advised a man on how to keep mineral rights that were rightfully his when he was challenged by someone more experienced. Two wells were drilled on his property and she said he still calls her from time to time to thank her.

“You’re never doing wrong if you help somebody,” she said.

“If it doesn’t come back to you in some way then at least you’ve shown someone a better way of being and thinking,” she said.

Evelyn’s friend, Joyce Harvey, arranged the American Press interview and was there for it. She prompted Evelyn to tell the story about the attorney who called her when she was hospitalized.

“He told me nobody else would be able to correct the property description but me,” Evelyn said. “I told him I’d take care of it as soon as I was discharged.”

Evelyn takes coffee to Pete every morning in bed. Every morning she makes him the same breakfast — two eggs, two sausage patties and two homemade biscuits. She said he likes what most men do — meat and rice and gravy — but she’s managed to work in more vegetables. She has always paid attention to her father’s comments about people who didn’t do what they were told and died because of it. The Gearens watch the news and weather on TV and spend a lot of time on their porch, enjoying the quietness of country living and thinking about their younger days, Evelyn said.

Pete said he married Evelyn because he knew he couldn’t live without her and now he needs her more than ever.

His greatest consternation is that he can’t work the way he used to. One day they were talking and he asked her why he was still here.

“I don’t know why the Lord’s not ready for us. I guess there’s something yet that we’re supposed to do,” she told him.

She knows she’s supposed to be taking care of Pete. She still types, perfectly, on her manual typewriter and one day she hopes to put together a book about the people she’s known in the community, the Gearens, the Carltons and a way of life that future generations will never know.