Resolution of sympathy presented to family of Gerald Williams 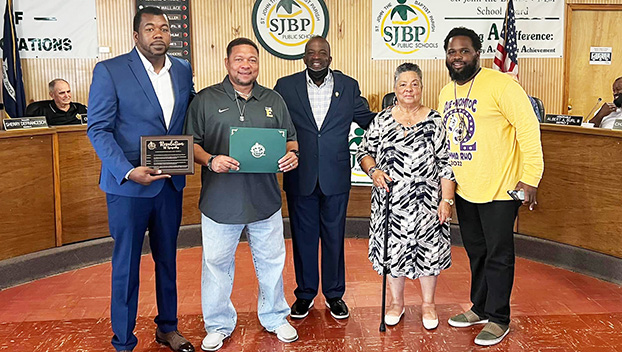 RESERVE — A resolution of sympathy was presented to the family of the late Gerald “Ice” Williams, a 1984 graduate of East St. John High School who was later drafted by the New York Yankees and played for six Major League Baseball teams.

Williams passed away at age 55 in February 2022 following a battle with cancer.

Members of the St. John Parish School Board presented the resolution on May 26 during a meeting in Reserve, during which members of the Board reflected on Williams’ impact. Board members Keith Jones and Patrick Sanders graduated alongside Williams. Board member Gerald Keller noted that Williams was a substitute teacher in the school system and the only person from St. John Parish to date who has participated in a World Series.

Williams’ family extended their thanks to the School Board and to local educator Derron Cook for steering this effort.

Cook said the resolution of sympathy is only the beginning.

He is continuing to work closely with Juan Watkins, a LaPlace native and 2022 inductee into the Grambling Legends Sports Hall of Fame, to gather support for the renaming of the East St. John baseball complex in honor of Williams.

Watkins and Williams were more than teammates; they were lifetime friends bonded as closely as brothers from the time they were 3 years old. He can think of no better role model for the children of St. John the Baptist Parish.

“He was a gentleman who cared more about anybody and everybody than himself. Gerald never smoked. Gerald never drank, and I have never heard Gerald say a cuss word in my entire life being around him,” Watkins said.

Standing in for Williams’ mother, Blanche Watkins Fernandez of LaPlace told the School Board that she always thought of Williams as one of her sons.

Williams’ younger brother was also present to thank the School Board for the resolution.