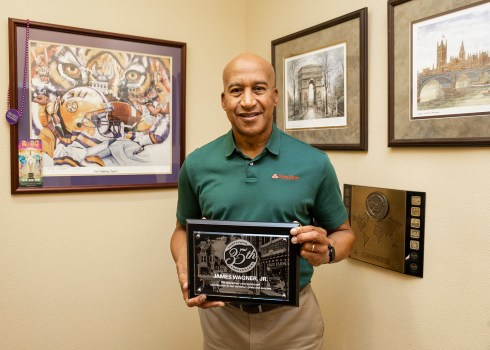 James Wagner holds up a plaque commemorating his 35 years with State Farm. 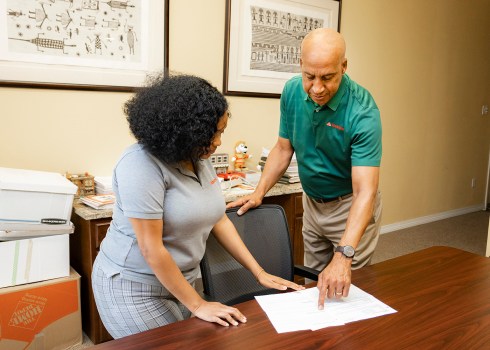 LAPLACE – While working in catastrophe management for State Farm, James Wagner traveled the country and came face-to-face with widespread destruction from devastating earthquakes, hurricanes, tornadoes and snowstorms.
Those experiences prepared him to serve St. John the Baptist Parish and the surrounding area as a State Farm agent.
Wagner celebrated 35 years with State Farm in November 2021. This year marks his 21st anniversary as an agent, and he is continuing to assist the community in times of need.
Wagner entered the insurance industry after graduating from LSU in 1985. At the time, he connected with a college friend who worked in the insurance business as a State Farm agent. Wagner started out as a claim representative in Lake Charles in 1986. Four years later, he transferred to the New Orleans area to work as an adjuster.
In 1993, Wagner was promoted to the corporate office in Bloomington, Illinois, to work in claims technology. He was promoted once again to work in catastrophe management for State Farm’s corporate office, which required him to travel to sites of major disasters around the country.
Along with his team of adjusters, Wagner surveyed destruction from the Northridge earthquake in California, a powerful hurricane that struck North Carolina, and several tornadoes and snowstorms that tore a path through the Midwest.
“It was an eye-opening experience to go across the country and assist our policyholders with disasters such as earthquakes, floods, snow storms and hurricanes. It was heartwarming to assist people in recovering from unexpected catastrophe events,” Wagner said. “It was gratifying to be able to be in a position to assist people who lost everything with basic needs including food, shelter and clothing.”
In 2001, Wagner was asked to consider an agency opportunity on Belle Terre Boulevard in LaPlace.
“I had never been to LaPlace. When I came to visit, I knew in my heart that this was where I needed to be. The people were so warm and welcoming in the River Parish area,” Wagner said.
James Wagner State Farm offers homeowner’s insurance, automobile insurance, life insurance and health insurance, in addition to banking services.
Education and prevention are a large part of Wagner’s work as an agent. He advises policyholders to take inventory of personal contents and photos of property that is insured prior to a disaster so documentation is readily available in the event of loss. The most rewarding part of his job is seeing people able to move on with their lives after a disaster because they had proper coverage.
Debra Green is proud to be part of Wagner’s team because of his compassion for others.
“He is concerned for people in the parish in a professional and business sense, but on a personal level as well,” Green said. “He does whatever he can here at the agency and outside the agency as well. He’s always willing to give back.”
According to Wagner, insurance companies in Louisiana are seeing more frequent and intense hurricanes.
“It’s been difficult for some companies to stay solvent,” Wagner said. “State Farm is a very strong company. It has 30% of the market, so one out of every three homes and one out of every three vehicles is insured by State Farm. With the increased number of hurricanes that we are having and the intensity of these storms, it’s imperative that our policyholders be adequately covered.”
Wagner remains actively involved in the St. John Parish community. He is a board member of St. John United Way, through which he facilitates the distribution of financial resources to several charitable organizations.
Wagner previously served as vice president of the Rotary Club of LaPlace, and he continues to speak to the youth about the importance of insurance and career opportunities in insurance.
Wagner’s office is located at 362 Belle Terre Blvd. in LaPlace. He can be reached at 985-652-1400 from 9 a.m. to 5 p.m. Monday through Friday.
For more information, visit www.jameswagnerinsurance.com.