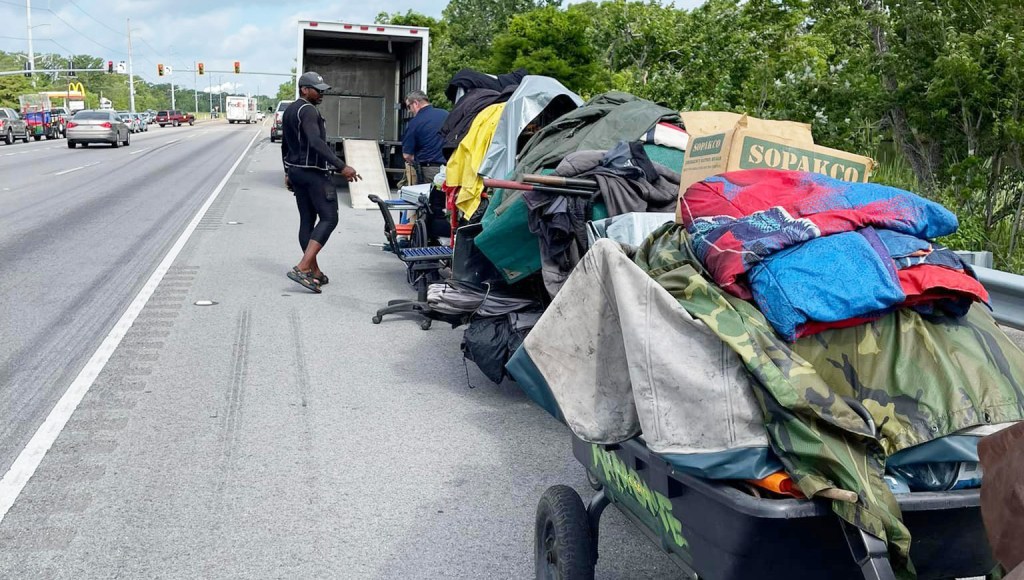 Ramone, also known as the man pushing the carts, is pictured on Airline Highway in front of Ormond Boulevard in Destrehan on Friday, May 20.

LAPLACE — Mr. Ramone, known to locals as “the man pushing the carts”, is one step closer to reaching his destination in Alaska after receiving assistance from the St. Charles and St. John the Baptist Parish Sheriff’s Office.

At Ramone’s request, St. John Parish deputies obtained a U-haul and transported him and his belongings to the Baton Rouge area early Monday afternoon.

Ramone is reported to have started his journey in Tampa, Florida. After trekking along Airline Highway through St. Charles Parish for more than a month, Ramone was relocated from the entrance of Ormond Boulevard in Destrehan to a safer area west of the Spillway Bridge on Friday, May 20.

Sheriff Mike Tregre was flooded with calls from residents advising him that Ramone had reached the St. John Parish line. Tregre sent deputies to his location to ask how they could help. At the time, Ramone advised officers that he was fine and had everything he needed.

“We explained to him that this stretch of highway is extremely dangerous, and there is no shoulder for him and his property a couple of miles ahead,” Tregre said in a social media post Monday night. “We further advised him that once he got on Airline Highway in the next parish that there is a stretch of highway for miles that is extremely dark and there is no one around. Ramone appreciated us advising him of the potential dangers ahead.”

While Ramone initially turned down the offer for assistance, he advised officers to check on him Monday morning. When officers checked in on May 23, Ramone asked to be transported further west on his journey. The St. John Sheriff’s Office obtained a U-haul truck and loaded all of his property to be transported to Baton Rouge.

“Ramone is now closer on his journey to Alaska. I would like to thank all of the people that were concerned about him. I think we made the right decision. It feels good to see people concerned about another human being,” Tregre said.