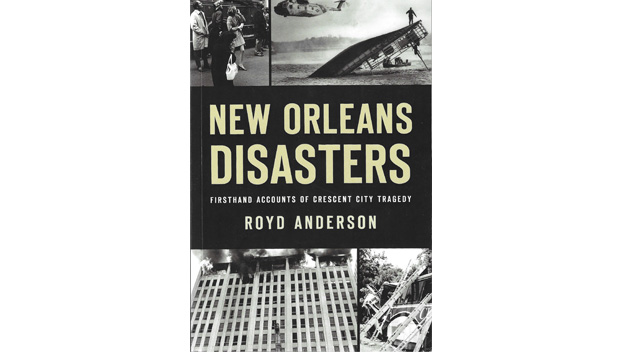 Anderson will hold two signing events in St. John the Baptist Parish on Saturday, May 28 for his new book, “New Orleans Disasters: Firsthand Accounts of Crescent City Tragedy.” The book peaked at No. 4 on Amazon’s new releases in the disaster relief category in November 2021.

EDGARD — While hundreds of books document the tragedy of Hurricane Katrina, few have explored lesser-known Crescent City calamities that have left a mark on the world.

Local filmmaker, teacher and historian Royd Anderson has conducted firsthand interviews to share knowledge of these 20th Century tragedies with the next generation. Through his work, Anderson also sheds light on how safety standards across the country have been enhanced as a result of the Luling Ferry Disaster, the Mother’s Day Bus Crash on 610, the Pan Am Flight 759 crash, the Rault Center fire, the Continental Grain Elevator explosion and the Howard Johnson sniper attack.

Anderson will hold two signing events in St. John the Baptist Parish on Saturday, May 28 for his new book, “New Orleans Disasters: Firsthand Accounts of Crescent City Tragedy.” The book peaked at No. 4 on Amazon’s new releases in the disaster relief category in November 2021.

The first book signing will take place from 10 a.m. to noon at the Edgard Library, while the second will be held from 1:30 to 3:30 p.m. at the Garyville Library.

During the book signings, Anderson will also be screening two of his documentaries: “Mother’s Day Bus Crash on 610” and “The Luling Ferry Disaster.”

Anderson’s research dates back to 2005, when he was a graduate student at the University of Louisiana at Lafayette. The 1976 MV George Prince ferry disaster in Luling became the topic of his master’s thesis project, when the 30th anniversary of the tragedy was quickly approaching.

“A lot of people from my generation and younger knew nothing about it,” Anderson said. “Hurricane Katrina struck right in the middle of that. A lot of my professors wanted me to switch my topic to Hurricane Katrina, but I stuck with a ferry disaster because it was an unknown disaster to my generation. It needed the attention that you don’t find in Louisiana history textbooks.”

At the time, the only monument recognizing the ferry disaster was located in front of the Edgard Courthouse in St. John the Baptist Parish. Anderson’s 2006 documentary of the ferry disaster rallied community support for a new memorial to be established at the East Bank Bridge Park in St. Charles Parish, much closer to where the disaster occurred. On October 17, 2009, more than 300 people were in attendance at the unveiling ceremony as a ringing bell and balloon release honored each of the 78 lives lost.

While teaching at Hahnville shortly after the ferry documentary was released, Anderson was approached by a school counselor who lost her godfather in the Westwego Continental Grain Elevator Explosion of 1977.

The grain elevator explosion became the topic of Anderson’s next documentary in 2007. The disasters continued to gain much-needed attention as the ferry and grain elevator films won the “best documentary” category of the Pelican d’Or Short Film Festival in 2007 and 2008.

“Before the film on the grain elevator explosion, there was nothing being taught about it,” Anderson said.

His next documentaries explored the Pan Am Flight 759 that slammed into a Kenner neighborhood in 1982, the UpStairs Lounge arson attack of 1973, and the tragic 1999 Mother’s Day Bus Crash.

“It’s very important to remember lives lost and the changes that have been made in society because of these tragedies,” Anderson said. “These disasters have made the world a safer place.”

According to Anderson, the Rault Center fire in New Orleans led to the implementation of mandatory sprinkler systems now used across the country in high rise buildings. Louisiana became the first state to put sprinkler systems into law as a result of the tragedy.

During the fire, women trapped in a beauty salon on an upper floor had to make the devastating decision to burn or jump to their deaths. This tragedy inspired Louisiana mechanical engineer John Scurlock to invent the inflatable safety air cushion often utilized in fire rescue and action movie stunts.

Scurlock was also the inventor of the bouncy house commonly seen at children’s birthday parties.

Aircraft now remain grounded during thunderstorms, but that wasn’t the case in 1982, when a vortex of wind shear caused Pan Am Flight 759 to crash. Meanwhile, the Luling ferry disaster led to random drug and alcohol testing for ferry captains.

According to Anderson, seat belts are now required on commercial buses as a direct result of the Mother’s Day Bus Crash that claimed 22 lives. The bus was carrying several elderly residents of Place Du Bourg in LaPlace, and the memory remains painful for many families in St. John the Baptist Parish and surrounding areas more than 20 years later.

Today, the only memorial for the crash lies on the grounds of the privately-owned Place Du Bourg senior living center. Since releasing a 20th anniversary documentary on the crash in 2019, Anderson has been on a mission to erect a memorial where the crash occurred, near the Pan Am Stadium in New Orleans City Park.

Anderson is willing to fundraise for the plaque, estimated at a cost of $3,400 for cast bronze or $3,000 for cast aluminum. The mock-up of the memorial includes the names of all 22 victims.

Those who would like more information on the Crescent City disasters may contact Anderson at rcand@mygrad.loyno.edu. His new book, “New Orleans Disasters: Firsthand Accounts of Crescent City Tragedy,” can be obtained at www.amazon.com/New-Orleans-Disasters-Firsthand-Accounts/dp/1467146366. Autographed copies of the book are available upon request for those unable to attend the book signings.