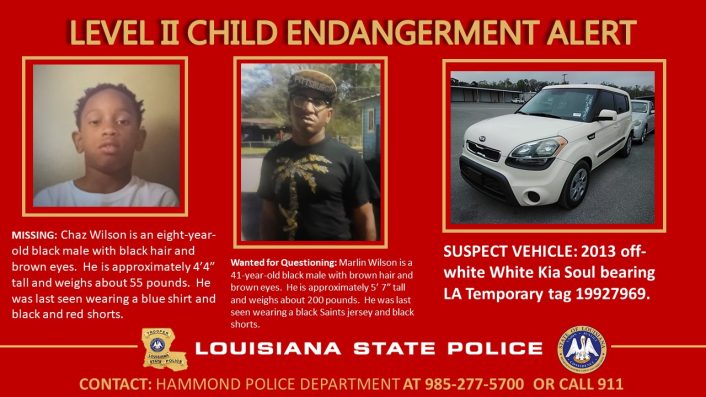 Update: child has been found and is safe.

Hammond – Louisiana State Police have issued a Level II Endangered/Missing Child Advisory on behalf of the Hammond Police Department for 8-year-old, Chaz Wilson, who is missing. Wilson left his home at 216 North Scanlan Street in Hammond, on Tuesday, May 17, 2022 around 8:00 a.m. and never returned home. It is believed Chaz is with his uncle, Marlin Enquire Wilson and he is in imminent danger.

Chaz Wilson is an eight-year-old black male with black hair and brown eyes.  He is approximately 4’4” tall and weighs about 55 pounds.  He was last seen wearing a blue shirt and black and red shorts.

Marlin Wilson is wanted for questioning in the child’s disappearance. Wilson is a 41-year-old black male with brown hair and brown eyes.  He is approximately 5’ 7” tall and weighs about 200 pounds.  He was last seen wearing a black Saints jersey and black shorts. He is believed to be driving a 2013 off-white White Kia Soul bearing LA Temporary tag 19927969.