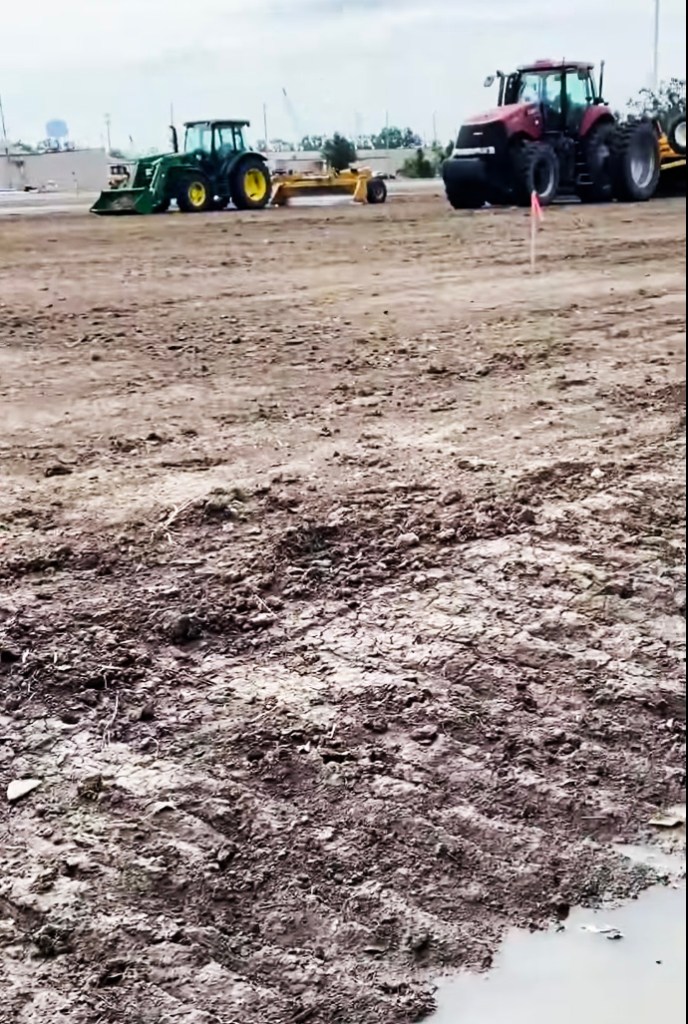 FEMA trailer park construction at the “Rainbow site” next to the St. John Memorial Cemetery and across from Geaux Chevrolet has been underway this month. There will be 97 units, and occupancy is expected for mid-July.

LAPLACE — St. John the Baptist Parish residents will be the first occupants of a FEMA trailer park under construction at 2150 W. Airline Highway, across from the Geaux Chevrolet dealership in LaPlace.

The site holds 97 units, and occupancy is expected in mid-July. According to a FEMA spokesperson, the site will be able to accommodate families in St. John Parish who are still in need of emergency temporary housing. If there are additional empty pads, occupants will be identified from neighboring zip codes.

During a March 22 meeting in LaPlace, the St. John Parish Council authorized Parish President Jaclyn Hotard to execute a temporary conditional use permit for the placement of up to 97 FEMA trailers at 2150 W. Airline Highway in LaPlace.

Hotard said identifying the site was a lengthy process for FEMA because the property needed to check several boxes.

The property identified for the FEMA trailer park has been owned by Rainbow Chevrolet since December 2006, according to the St. John Parish Assessor’s website. According to Hotard, the Rainbow site was the only location large enough to accommodate housing needs, located outside of a flood zone on flat and cleared land, with a willing property owner.

During the March 22 meeting, Hotard explained that a temporary conditional use permit was utilized because a rezoning of the commercial property would have been a longer process. A rezoning would have additionally gone against the St. John Parish zoning plan.

The intent is for the site to return to its previous condition as commercial property.

District IV Councilwoman Tyra Duhe-Griffin wants residents to understand that no permit has been applied for other than the temporary conditional use permit, and she would not support a rezoning in the future.

“Residents are concerned how long it will be there for. Based on the contract – the temporary conditional use permit – in no event shall this temporary housing site be permanent or extended beyond March 1, 2023,” Duhe-Griffin said. “Based on the concerns of the residents, I am not going to vote on an approval for an extension.”

Failure to return the site to its original condition following the expiration of the temporary conditional use permit, including removal of all temporary housing, roads, infrastructure, utility meters, etc., will results in penalties, fines and adjudication through an administrative hearing process.

Duhe-Griffin has communicated her constituents’ safety concerns to Sheriff Mike Tregre, and crime statistics are being gathered on two FEMA trailer parks that were established following Hurricane Isaac in 2012.

She also has concerns about the process, particularly that residents didn’t have an opportunity to properly voice their opinions on the matter before the Planning and Zoning Commission. Duhe-Griffin would also like a clearer idea of how many of the 97 trailers will be occupied by St. John Parish families.
There were initially 881 St. John Parish families qualifying for temporary emergency housing through FEMA in the immediate aftermath of Hurricane Ida. As of the last week of March, 126 families still needed placement, and it was anticipated when the temporary conditional use permit was executed that 88 families will still be in need by the time the site is up and running.

While some residents have questioned why FEMA trailers are being placed in a park instead of at residences, Duhe-Griffin said not all families in need of housing have space to park a trailer. This is especially true for those residing in apartments.

“I am not against temporary housing. What I am against is a new permanent trailer park coming into the corridor of St. John the Baptist Parish. I don’t want to set that precedent,” Duhe-Griffin said. “Coming into St. John the Baptist Parish, it should be beautiful, and we should not be looking at an eyesore of an unused FEMA park.l I hope that they stick to their end of this temporary conditional use permit and that, by March 1, 2023, our residents will be back in their homes.”

Residents also had questions regarding how the Rainbow site will impact sewage and stormwater drainage.

Since the site will be connected to a local sewer, no lift stations will be required. Drainage has also been taken into account.

According to FEMA, “The site design was reviewed and permitted by the state and parish, meeting all applicable laws, regulations and ordinances.  The site was designed to attenuate any changes so there is no increase in flow.”