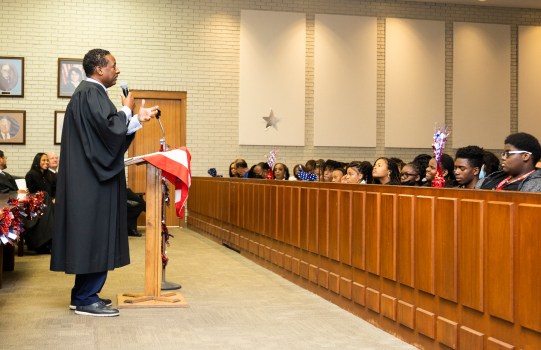 The Honorable Judge Marc Johnson of the Fifth Circuit Court of Appeals urges students to be active participants in the judicial system once they are old enough to vote and serve on a jury. 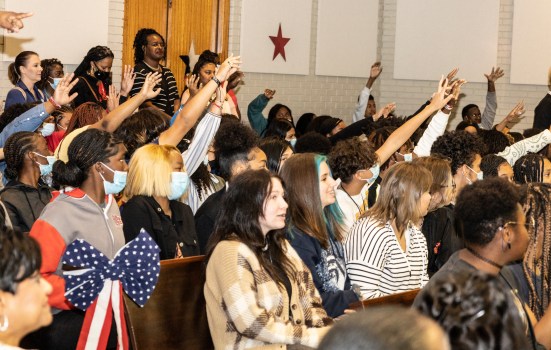 Students from St. John the Baptist Parish schools volunteer to be part of a mock jury. 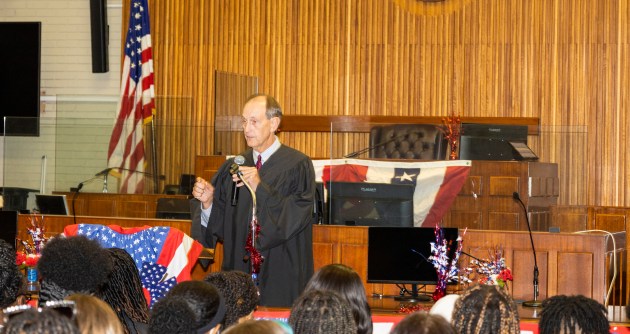 Chief Justice John L. Weimer of the Louisiana Supreme Court speaks to students about the importance of education. 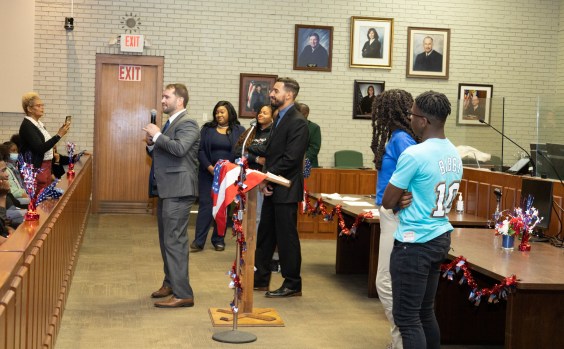 Law clerks of the 40th Judicial District Court lead students through a mock voir dire exercise during Law Day at the Edgard Courthouse.

When the Honorable Judge Marc Johnson of the Fifth Circuit Court of Appeals looked into the audience of young, curious faces, he saw a reflection of himself 40 years ago. He shared how involvement matters, even for students who are not yet old enough to vote or serve on a jury.

“You have to be involved. If you put the time in while you are in high school, it makes it easier with whatever you want to do in life, whether you want to go to college or pursue a trade,” Johnson said.

He added, “When you start participating in the jury system, you see how things work. When you get that summons, make sure you respond to it. Be someone who really wants to participate. In order for the system to be fair, we have to participate.”

The theme for Law Day 2022 was “Toward a More Perfect Union: The Constitution in Times of Change.” Johnson explained that voters have a voice to change the Constitution. One notable example was in 2020, when voters declared non-unanimous jury convictions to be unconstitutional.

With assistance from law clerks Stetson Aubrey, Gabrielle McKarry and Joshua Mendez, students participated in a mock voir dire exercise to learn how jury pools are narrowed down by questioning from the prosecution and the defense.

The Honorable Vercell Fiffie, Nghana Lewis and Sterling Snowdy of the 40th Judicial District Court were on hand to answer students’ questions.

When Weimer became chief justice in January 2021, the first thing he did was send a letter to all of the judges in the state of Louisiana, requesting them to be concerned about the communities in which they reside and take all opportunities to interact with the youth beyond the walls of the courthouse.

Weimer was proud to say the 40th Judicial District judges are actively engaging with children in local schools. He was regretful that he did not see the value of education when he was in high school. Relaying his story to the St. John Parish students, Weimer explained that he lost his mother at an early age and was raised in an environment where work was prioritized above school. After his father fell ill and he was denied power of attorney over the family business at age 16, Weimer realized the only way to secure his future was by getting serious about school.

“As you go through life, you realize you are at a severe disadvantage without education,” he said.

During Law Day 2022, students were also recognized with cash prizes for participation in a video contest about the judicial system.