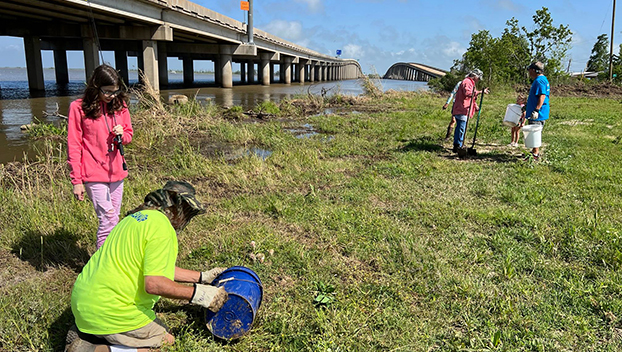 The Friends of the Manchac Greenway recently planted cypress trees along the lakeshore in Sunset Park on the Greenway. The trees were donated by the Pontchartrain Conservancy. Full restoration of the park, including replacement of the picnic shelters and fencing swept away by Hurricane Ida, has been pledged by St. John Parish President Hotard.

MANCHAC — Plans for cyclist paths on the stretch of land between Lake Pontchartrain and Lake Maurepas were discussed as the Friends of the Manchac Greenway convened on Wednesday, April 20 at Sunset Stop/Gator’s Den in Galva.

Transportation planner Sam Buckley of the New Orleans Regional Planning Commission, Tara Lambeth of St. John Planning & Permits and Bridgett Bailey of Tangipahoa Planning are currently working together on many of the details involved with bringing the Manchac Greenway from the Mississippi River levee-top bike trail at LaPlace to Ponchatoula. Friends of the Manchac Greenway is considering combining plans for St. John the Baptist and Tangipahoa parishes into a single master plan.

Grady Geiger Sr. (U.S. Army Corps of Engineers, Ret.), pointed out that the concept of a paved bike path occupying the maintenance road atop the new storm surge protection levee from the Greenway to St. James Parish might not work because parts of the levee may only be 4 feet high and wouldn’t be wide enough.

Friends of the Manchac Greenway member Ben Taylor described a recent meeting with the Tangipahoa Parish Planning Dept., Frank Neelis, Sam Buckley and others to discuss how to deal with “The Squeeze,” the area at the north end of the Greenway where I-55/DOT and Canadian National Railroad property lines meet and where there is no room for bicycles to legally pass through. A path on the east side of the railroad that squeezes between the railroad and Ponchatoula’s wastewater treatment pond levees is being considered.

The cost of just the boardwalk from Selsers Canal (a.k.a. South Slough) to Southeast Railroad Ave. in Ponchatoula is estimated to be $1.5 – $2 million with a 20% cost share.

Neelis and Buckley discussed an application for the Greenway for a grant offered by the National Scenic Byways Program. A previously prepared cost estimate for a widened road shoulder with striping and vibration strips will be used. Ways to eventually “phase-in” the integration of sections of the old Hammond Highway alongside this pedestrian/bicycle thoroughfare were also discussed. Neelis proposed a committee be formed to determine specific uses for the Scenic Byways grant.

Neelis also related his recent visit to LA DOTD District 62 to clarify property boundaries of the Greenway. It was determined that much of the west side of I-55 are wetlands falling under Louisiana Wildlife & Fisheries Wildlife Management Areas. On the east side of I-55 is a narrow band of property that is optionally owned by private interest. Beyond that is a 150-foot right-of-way centered on the old US 51, bound on the east by the unused Hammond Hwy. (old Louisiana 33). However, further clarification is being sought from St. John the Baptist Parish Assessor Lucien Gauff.

In other Friends of the Manchac Greenway news:

The next Friends of the Manchac Greenway meeting will be held at 2 p.m. May 25 at Frenier Landing Restaurant in LaPlace.