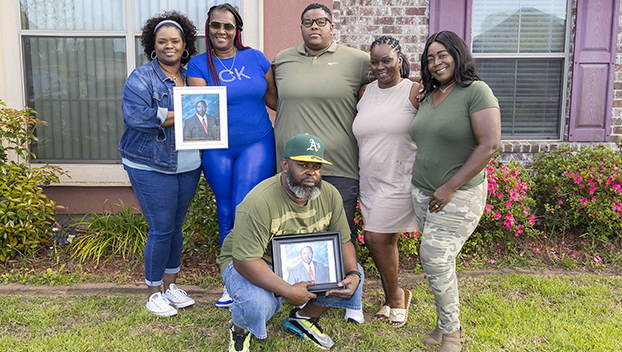 LAPLACE — Larry Snyder Sr. never hesitated to open up his home or dig into his own pockets to provide for someone in need.

More than a former St. John the Baptist Parish Councilman, he was a pillar of the community, a coach, an educator, a cook, and a dedicated family man with a talent for bringing everyone together.

Snyder transitioned from this life on Tuesday, April 19. His seven children have quickly learned that everyone has a Larry Snyder story, and his legacy lives on through every life he has touched.

Half of the Cambridge subdivision remembers him as the man who rounded up school buses, trucks and boats to rescue neighbors from rising floodwaters during Hurricane Isaac in 2012. When Hurricane Ida struck in August 2021, Snyder’s home once again became a safe haven. On a social media post, one man recounted how he was coming up Cambridge Drive, bleeding, when Snyder took him in and provided him with clothing and bandages.

That was just the type of person he was, according to his children.

“If we weren’t there to witness it ourselves, he would have never shared these stories with us. He was humble in that way,” his daughter, Trina Snyder, said.

Since Snyder’s passing, others in the community have stepped forward with their own stories. Volunteering to pay for funeral expenses and packing up school uniforms for underprivileged families was only the tip of the iceberg.  He was “Mr. Make it Happen,” and he always made sure to stop and introduce himself to neighbors as he rode his bike throughout District Six.

When he wasn’t at home, Snyder could often be found fellowshipping over boiled turkey necks with the “Pecan Tree Posse” on the corner of Martin Luther King and River Road in Reserve. The group of friends would feed anyone who stopped by. On several occasions, the Pecan Tree Posse used their resources to host benefit dinners, raising funds for community members burdened with medical expenses.

St. John Parish was always close to Snyder’s heart. He was a lifelong resident, born and raised in the Cornland neighborhood as one of nine children. His father was a preacher, and he grew up to become a hardworking, Christian man who always upheld his values.

“He was a stand-up guy who meant what he said. He cut no corners. He was well-respected; a man of integrity,” his daughter, Diashiki Brown, said. “He taught me how to be a strong person and not wait for people to hand you things. It wasn’t physically said out of his mouth, but it was shown to me through actions.”

Snyder’s daughter Michelle Clay added that he never compromised his integrity while serving as the District Six Councilman for nine years.

“No matter who you were, he always stood up for what was right. There is use of power and abuse of power. My dad knew how to use it, and he never abused it,” Clay said.

During his time in office, Snyder was a major advocate for drainage solutions and levee protection. He fought against community blight and helped secure stop signs along Cambridge Drive to promote public safety.

“He was councilman of District Six, but you could’ve sworn he was the councilman-at-large because people from every district called him,” his daughter, Kecia Washington, said. “If there was a problem in Garyville, he would go deal with it. It never bothered him to help people.

He was a die-hard fan of East St. John, his alma mater Southern University, and, of course, the New Orleans Saints. There was always an occasion to tailgate, especially when it meant bringing the family closer together.

“He taught us about the celebration of family; the importance of sticking together,” Washington said. “He wanted us to celebrate everything together. We would even celebrate football games together.”

Love and laughter surrounded the entire extended family. As his siblings passed on, Snyder was a father figure to his many nieces and nephews. Never afraid to show affection, he always greeted his daughters, and even his son, with a hug and a kiss.

“My dad was my first love and the example of how a man should treat you,” Trina Snyder said.

Snyder did a little bit of everything during his lifetime. He was an entrepreneur, a member of the Krewe Du Monde parade, and a gumbo cook-off champion at the St. John Parish Andouille Festival. Cooking was always important to him, and it’s a tradition his son, Larry Snyder Jr., carries on today.

After teaching in the local schools, Snyder enjoyed a 30-year career with Union Carbide that allowed him to provide for his family.

Snyder also made an impact in the community as a member of the Red Cross and the Knights of Peter Claiborne.

A wake/memorial service will be held beginning at 5 p.m. Friday, April 29 at Bethlehem Baptist Church. A Mass of Christian burial will be held on Saturday, April 30, at St. Joan of Arc Catholic Church. Visitation begins at 9 a.m., and Mass is at 11 a.m.