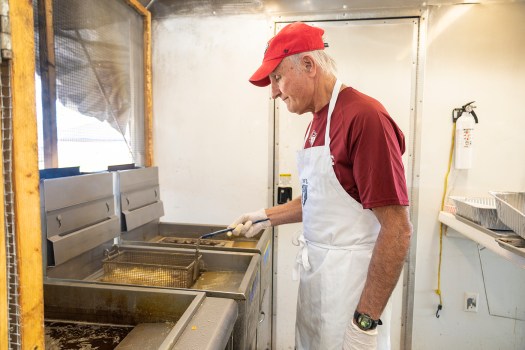 Frank Sipos prepares fried fish. The annual fish fry is one of the biggest fundraisers for the Knights of Columbus Ascension of Our Lord Council. 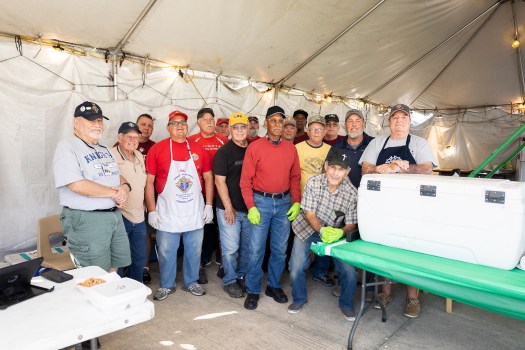 Members of the Ascension of Our Lord Knights of Columbus Council 9623 are pictured during a 2022 fish fry event on the AOL Catholic School campus.

LAPLACE — The Ascension of Our Lord Knights of Columbus fish fry has been a hallmark of the Lenten season in St. John the Baptist Parish for approximately  30 years.

The AOL Knights of Columbus Council 9623 served approximately 450 pounds of fried and grilled fish, 400 pounds of corn, and 200 pounds of potatoes each Friday from March 4 to April 8. Proceeds contributed to the Benjamin Piovan Scholarship fund, which will be awarded to two Ascension of Our Lord seventh graders who are continuing their education at St. Charles Catholic High School.

Grand Knight Mike Abbate said the annual scholarship, which covers tuition at St. Charles Catholic, is awarded based on a student’s patriotism and community involvement. Through a different program, Council 9623 also supports education through the Catholic Youth Leadership Award, presented to a boy and a girl each year.

While the fish fry is primarily used as a fundraiser for the Benjamin Piovan scholarship, proceeds can make an impact through various charities and disaster relief efforts.

“This is one of our major fundraisers for the year, so it’s important we do really well. Whatever we have leftover goes toward other Knights of Columbus initiatives, including disaster relief,” said Lloyd Schexnayder, a member of Council 9623. “We have gone to Lake Charles, Port Arthur, Panama City, all over, providing meals after disasters. We’re a nonprofit, so everything we collect goes back out.”

Over the past several years, the Knights of Columbus have headed disaster relief efforts by cooking large pots of jambalaya and pastalaya for victims of natural disasters in neighboring states. The tables were turned in 2021 when it was Council 9623’s own St. John Parish community crying out for help.

The AOL Knights of Columbus began collecting non-perishable food items and hygiene essentials at the start of the 2021 Atlantic Hurricane Season, months before Hurricane Ida was a thought in anyone’s mind. When the monster hurricane hit on August 29, 2021, Council 9623 was prepared to provide aid to the community with baby items, bottled water, toilet tissue, paper towels, canned goods, cleaning supplies and more.

On September 11, 2021, a cooking team showed up to distribute 800 meals to impacted residents. With the help of Ascension of Our Lord Church Parish Pastor Cyril Buyera, Council 9623 was able to open a Hurricane Ida Supply Center located under the AOL School overhang. Disaster supplies were distributed to the community on weekends and some weekdays, amounting to 28,000 pounds of supplies handed out from September 11 to December 22.

Council 9623 historian James Poche recalls seeing cars lined for miles down the streets for hurricane supplies. The Ascension of Our Lord Catholic School campus became a beacon of hope, not only during the Knights of Columbus disaster relief program, but also during the fish fry program that served the community through the height of the COVID-19 pandemic.

“I love working with the Knights of Columbus,” Poche said. “I’ve been retired for about six years. I love doing this because I have time to do it. It gets me out the house, and the fish fry is my favorite project all year long.”