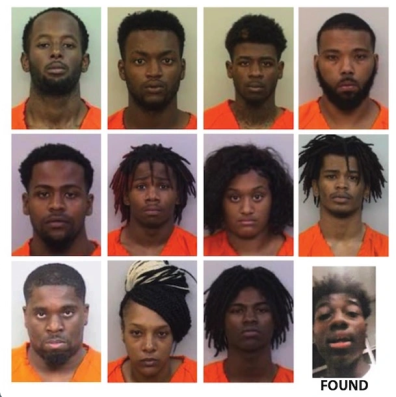 The Lake Charles Police Department has arrested 10 men and two women in connection with the fatal shooting of 6-year-old Draya Guillory.

“About a quarter to 11, we received a call about a shooting in the 1400 block of Mill Street. Tragically, the life of Draya Guillory, a beautiful 6-year-old girl, ended there,” Chief Shawn Caldwell said. “She was sitting on the couch, watching TV. Detectives determined she was the victim of a drive-by shooting.”

The arrests were a collaborative effort between police officers, crime scene techs, members of the coroner’s office, the crime lab and the district’s attorney’s office, according to Caldwell.

The LCPD learned of an ongoing “argument between some people,” Caldwell said. He later described them as not an organized group or a group with a particular hierarchy.

“They identify themselves as NawfSideBabies,” he said.

The shooter intended to shoot at the residence where Draya was, Caldwell said.

Councilman Rodney Geyen called the investigation speedy and urged residents to be vigilant in doing their part to help police.

“We want the people to know that we stand behind the police department and all they’re doing, and we’re going to call upon the citizens of Lake Charles. The LCPD needs your help. This is an opportune time to get involved in getting the necessary information to the police department. If your children tip you off, please know we would certainly appreciate you giving that information to the LCPD,” Geyen said.

Assistant District Attorney Jacob Johnson called prosecuting offices such as this a “back-end solution to a front-end problem.”

“What we can do is prosecute as aggressively as we can. We can work hard to solve crimes, but stopping these things from happening is a front-end issue. And what I’m asking the members of this community to do is something that’s pretty unpopular today, and that is, to lead.”

Johnson said this murder was not likely this group’s first crime.

“They may not have been held accountable previously because of witnesses who will not participate, who will not talk with law enforcement and maybe that’s because of fear – or a litany of reasons.”

He said when criminals cannot be held accountable because of a lack of witnesses, they become emboldened.

Lake Charles Mayor Nic Hunter said the news of these and further arrests will not bring comfort. “Loss of life, all life, is tragic. But because of Draya Guillory’s young age, the community was hard hit.”

“There is nothing we can do to bring this little girl back. But hopefully, we were able to provide some degree of justice for her family,” he said.

He “begged” parents to sit with their teenagers. Show them a photo of Guillory and said she was “ruthlessly and unfairly taken away from her family and friends.”

“She was murdered and it was because of gun violence,” Hunter said. “To the residents out there, please know that this police department has done absolutely everything and moved heaven and earth to bring this case to where we are today.”

Fondel said 19-year-old Michael Carter turned himself in on Thursday and was charged with one count of criminal conspiracy to second-degree murder. His bond has been set at $2.5 million by Judge Tony Fazzio.