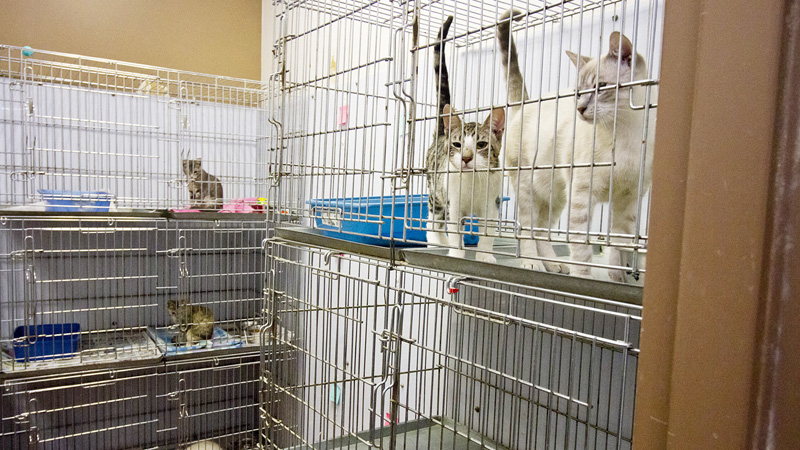 Cats are seen at the St. John Parish Animal Shelter prior to the building being damaged.

LAPLACE — Hurricane Ida damage to the St. John the Baptist Parish Animal Shelter has left a blank canvas to rebuild the facility to higher standards.

During last week’s meeting in LaPlace, the Parish Council authorized St. John Parish to receive requests for qualifications for design services related to the reconstruction of the Animal Shelter.

Several months prior to Hurricane Ida, the building suffered extensive damage due to leaks and termites, resulting in the loss of animal holding areas. The Animal Shelter staff continued to take phone calls and assist the public with rehoming and adoption requests.

Parish President Jaclyn Hotard said the RFQ will bring in an expert who specializes in Animal Shelter design. At this early stage, it is unclear whether rehabilitation will involve repairs or total reconstruction.

“We’re not sure what it’s going to take to rehabilitate that facility based on the (storm) damage and some of the damage that actually occurred before Hurricane Ida. I think this gives us a unique opportunity while the building is stripped down,” Parish President Jaclyn Hotard said. “I think we need someone who specializes in Animal Shelters to take a look at this and tell us what we can do so we can get a good plan going forward. Even if Hurricane Ida had not happened, we know we had to make some repairs to the building anyway. There may be some things that were done in 2008, when the Animal Shelter was built, that aren’t necessarily the best practice in 2022.”

Councilmen Lennix Madere Jr. and Warren Torres emphasized that the Animal Shelter building was poorly designed when it was first constructed in 2008. According to Madere, one faux pas was designing a garage that wasn’t large enough to fit the shelter’s van.

“The termites were the first ones that damaged it…then Ida came and finished it off. This time, we need to make sure we build it back the right way, the correct way,” Madere said. “That’s why we are taking this time to make sure we get someone who has experience designing animal shelters.”

Torres added, “We’re heading in the right direction by getting someone to design it the proper way. That’s a good thing.”

Councilwoman Tammy Houston has received several calls regarding homeless animals. With families and pets displaced from their homes, Houston believes the need for an animal shelter facility has become even more important in the aftermath of Hurricane Ida.

Hotard said the Animal Control program has many functions that go beyond sheltering, such as education of spaying and neutering to keep the stray animal population from expanding.

Councilwoman Tonia Schnyder asked if the shelter reconstruction would be eligible for FEMA reimbursement due to Hurricane Ida damage to the facility.
“We are going to attempt to get FEMA reimbursement,” Hotard said. “It’s not always a guarantee.”

Voters weigh in on quarter cent sales tax for…