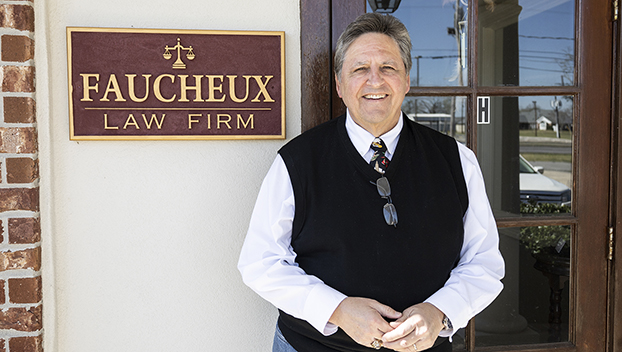 Robert Faucheux Jr. has practiced law since 1975. He opened Faucheux Law Firm in the River Parishes in 1978, and he continues to serve the community today from a new location in Lutcher.

LUTCHER — Attorney-at-Law Robert Faucheux Jr. has been an integral part of the River Parishes community for more than 45 years. Since 1975, he has impacted countless lives both through his legal practice and during his 12-year tenure in the Louisiana House of Representatives.

“I enjoy the diverse areas of practice and dealing with diverse people. I like being able to help people, and I plan on practicing as long as I am physically able to,” Faucheux said.

Faucheux has always been interested in politics. As a young man, he felt the best way to become involved in the political sphere was by becoming an attorney.

Faucheux graduated from LSU with a bachelor’s of science in 1972 and went on to study at Loyola University’s College of Law in New Orleans, where he graduated in 1975. He practiced with a local law firm for three years before opening his own office in 1978.

He’s had various associates while proudly serving the community for more than 45 years. His son and daughter-in-law, Christophé L. and Lindsay Melancon Faucheux, most recently worked alongside him up until Hurricane Ida struck Southeast Louisiana in August 2021.

Faucheux has practiced in federal courts across Louisiana, including the Eastern District, Middle District and Western District Federal Courts.

From 1996 through 2008, Faucheux represented District 57 in the Louisiana House of Representatives. His district covered portions of St. John and St. James parishes, areas currently represented by Randal Gaines and Speaker of the House Clay Schexnayder.

“In this area, I was representing the interests of the people. We have a heavy farmer and industrial clientele, so I had to try to balance those two areas,” Faucheux said.

During his time in the legislature, Faucheux dedicated capital to developing infrastructure for the South Louisiana Port Commission. This included passing legislation to bring the airport in Reserve, previously operated by the parish, under the authority of the Port Commission.

Faucheux was instrumental in bringing the Southeast Louisiana Veterans Home to St. John Parish, providing an economic boost to the area. He helped spearhead the opening of a facility to bring National Guard presence to Reserve, in addition to paving the way for criminal cases and arraignments to be moved from Edgard to the Courthouse Annex in LaPlace.

Roads were another focus during Faucheux’s time as a state representative. He passed legislation requiring motorists to have their headlights turned on while using windshield wipers. Faucheux also passed legislation that led to the repaving of portions of Airline Highway and Highway 44 in the River Parishes.

In the educational realm, Faucheux co-founded a bill that set up educational savings accounts to help students go to college. He worked diligently alongside Mr. Taylor on the TOPS program and also kept in close communication with the director of education.

While many members of the House of Representatives move on to the Senate after reaching their term limit, Faucheux opted not to run against a Senate member who had a similar philosophy to him.

“I made a decision that I had done my penance. I accomplished what I wanted to do,” Faucheux said.

Leaving the legislature has not stopped Faucheux from serving the community through his work as an attorney.

For the past 20-plus years, Faucheux has served as chief counsel for the Town of Gramercy. Since 2008, he has also served as magistrate over traffic tickets and misdemeanors.

In July 2021, Faucheux was named the attorney for the town of Sorrento in Ascension Parish.

A devout Catholic, Faucheux serves the community through the Knights of Columbus.

In 2016, Faucheux was honored by the American Registry for being in the Top 5% of America’s Most Honored Professionals. Also, from 2016 through 2021, Faucheux was recognized by Martindale-Hubbell for maintaining a high rating in legal ability and ethical standards.

Sharon Deroche celebrates 30 years with Faucheux Law Firm this month, and she said Faucheux’s dedication sets him apart from other attorneys across the region.

“He tries to help everybody, not matter what their problem is. He goes out of his way to help everybody,” Deroche said. “Everybody knows him because he’s been around here forever, and he gets along with everybody. He’s really people-oriented.”