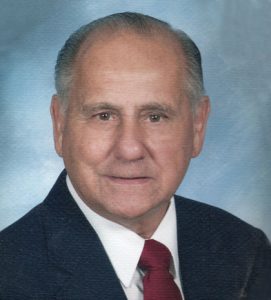 his loving wife and four children at home.  He was born on January 8, 1932 in Wallace, LA and long time resident of Destrehan.  He is survived by his loving wife of 65 years, Kathleen Mae Bourgeois and his four children; Mary Jordan (Jimmy), Margaret Favaloro (David), John Hymel (Shellie), and Edward Hymel III (Danielle).

Edward was the post master of 70047 for over 30 years as well as an electrician and TV/Computer repairman.  He was active in his faith and attended over  40 Manresa Ignatian Retreats, Group 47.  He served as a Sergeant in the Korean War with the Air Force 479th and was an America Legion Commander for post 366.  He enjoyed many hobbies including Bee Keeping and making his famous andouille and hogs head cheese with his sons and grandsons.

The family would like to extend their many thanks to his postal family and the great staff at Fresenius; Central Home Health nurses Janel and Tanya and therapist Lisa; and the many caring neighbors and friends who have helped when he was in need.