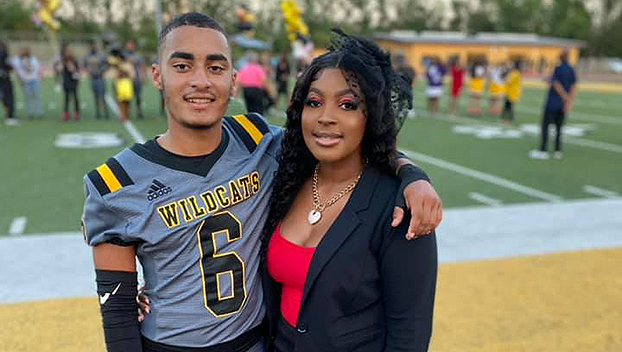 George Smith III and Ajeya Anthony have been together since middle school. They are now graduating from East St. John and embarking on a new journey together at LSU.

LAPLACE — Middle school sweethearts Ajeya Anthony and George Smith III started their journey together as Tigers at LaPlace Elementary. No longer cubs, these high school seniors are graduating near the top of their class at East St. John and preparing to become Tigers once again at Louisiana State University.

Ajeya and George are a force when they’re together, in both academics and athletics.

George leads his peers as the captain and quarterback of the Wildcats football team, in addition to serving as a fourth-year starting pitcher on East St. John’s baseball team. Combining brains and brawn, he’s also been named a state level chess champion under the leadership of national chess master Rene’ Phillips. George has already gained credits toward an engineering degree through the STEM Magnet program, and he’s expected to earn both academic and athletic scholarships as a result of his excellent performance on the field and in the classroom.

Ajeya has likewise been ranked at the top of her class at both LaPlace Elementary and East St. John High, in addition to being named to the Homecoming Court for both schools.

Volleyball has been her passion for the past six years. She’s built a legacy on the court through school and with the Baton Rouge based travel team known as “Feet2Ball.” Ajeya even transferred from the STEM Magnet campus back to East St. John during her junior year to study beside her teammates and form a stronger bond on the court. When her family was displaced in Texas following Hurricane Ida, Ajeya found a way to get back to Louisiana to play with her team.

Both Ajeya and George have received MVP awards for participation in baseball/softball and basketball. They’ve also participated in community service projects through several campus organizations.

While their families were initially skeptical that a relationship at age 12 could be built to last, Ajeya and George have proved through the years that they have the maturity, intellect and respect needed to head into the adult world together.

Blast from the past: LaPlace Dragway remembered for thrills…