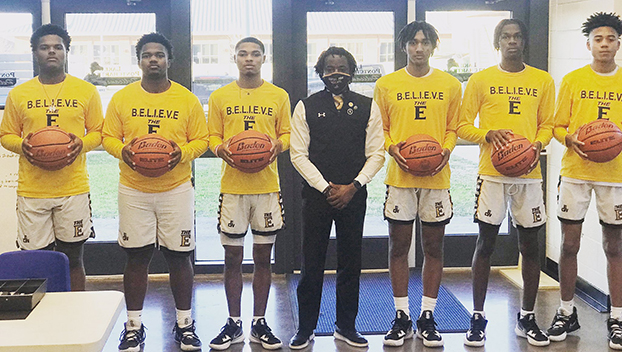 RESERVE — East St. John went into the second round of playoffs as an underdog and earned a ticket to the Class 5A basketball quarterfinals for the first time in recent memory after Tuesday’s 74-64 victory over Alexandria.

While the Trojans were ranked as the No. 2 team, Wildcats Coach Antonio Broadway Sr. wasn’t surprised by the win. The ‘E’ has brought their ‘A’ game all season long, cultivating a 28-8 record despite not having access to a home gym in the aftermath of Hurricane Ida.

“People are looking at us as a 15 seed. I was a little upset about the ranking at first, but you know what? Rankings don’t determine how far you go in the playoffs,” Broadway said. “A lot of people mentioned the upset. We didn’t consider it an upset because we are that top four caliber team. It’s good we stayed at 15 because now we’re able to sneak up on people.”

Alexandria jumped out with a 7-0 lead over East St. John after tip-off Tuesday night. Broadway called a time out early in the game and reminded the guys to stay poised.

Three-and-a-half hours from home, East St. John was in the midst of a vocal crowd of Alexandria fans. It wasn’t enough to rattle the Wildcats. After 36 games without a home gym, they are used to being the road.

“Going into it, we knew crowds were going to be a little rowdy. Alexandria is the No. 2 team in the state for a reason. They’ve got the fans’ support. They played like a team that won the state championship two years ago. They know what that second round means and what it takes to get to the next round,” Broadway said. “We did our normal routine, making the road trip up there. I just told them to believe. That’s been our thing this whole year, facing all this adversity.”

East St. John came back to lead 14-9 by the end of the first quarter. By halftime, they remained up by two points. Alexandria pushed back in the third and the fourth but couldn’t keep up with the Wildcats, who led by 16 at one point in the fourth quarter.

The game ended with the Wildcats on top, 74-64. Kylon Harris led in scoring with 24 points and five consecutive free throws in the fourth quarter. Bryce Gilyot contributed 18 points, followed by Warren Snyder with 11 points and John Bowser with 10 points. Broadway is proud of junior Devin Davis, an improved player who has shined in recent games.
“At 6’5”, he’s one of our big guys. He had eight points and 14 rebounds last night, and those rebounds were a tremendous factor for us,” Broadway said.

Walker defeated East St. John 58-69 when the two teams met in January, but Broadway expects playoffs will be a different story.

“Walker is definitely tough for us, going on the road in their house. When we played them earlier in January, we were winning that game by at least 16. We kind of let it slip away from us, just not being focused,” Broadway said. “This time, these guys are hungry. We’re close to our goal, and that’s what we believe in.”