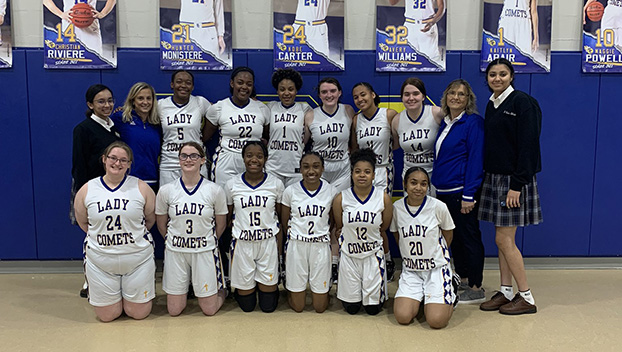 LAPLACE — Some members of the St. Charles Catholic girls’ basketball team are still displaced from home or living in hotels six months after Hurricane Ida. Yet, the girls were able to put all the trauma behind them for 32 minutes every time they stepped onto the court this season.

St. Charles Catholic ended its season in the LHSAA Division III girls’ basketball quarterfinals with a hard-fought 56-46 loss to No. 3 Isidore Newman last Friday night at the Fitzgerald/Skertich Arena in New Orleans.

SCC earned a No. 6 placement in the playoffs and defeated Catholic New Iberia 44-30 in last week’s regional round before advancing to the quarterfinals.

Head coach Dawn Gaubert said all of starters on the court played their part well and stepped up to contribute to the team’s success.

Senior point guard Kaitlyn Abair helped the Comets distribute the ball well. With great knowledge of the game, she became a coach on the floor.

Junior Mya Brown was the Comets’ post player in the middle and the team’s leading rebounder and scorer. Gaubert described her as “dynamite from down low,” but she can just as easily step out and has a nice touch from the three-point line.

Mya’s younger sister Kaylee Brown is only a freshman, but she is already developing into a leader who will guide the team for years to come.