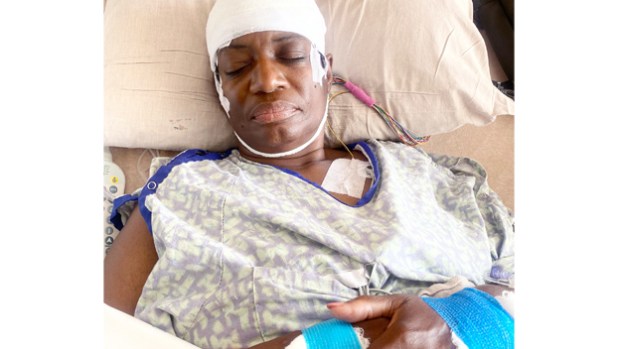 Peggy Joseph is seen in the hospital shortly after experiencing a stroke in August 2021. She has defied expectations in her recovery. 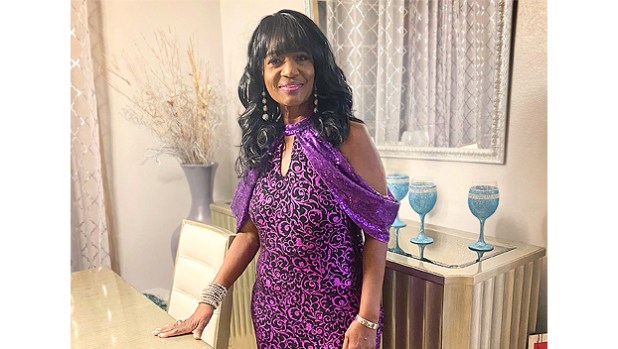 Peggy Joseph says it’s important to celebrate people while they are still alive rather than waiting for a funeral to share kind words. 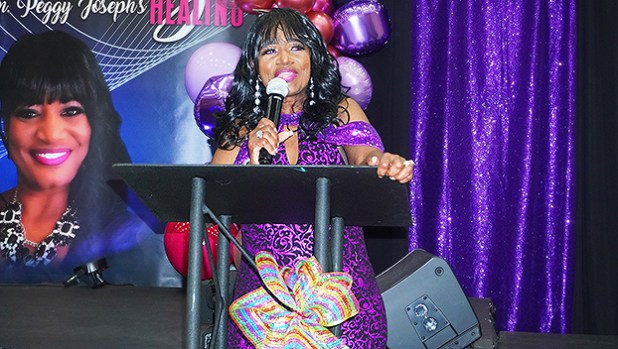 Min. Peggy Joseph is pictured sharing her story of healing for the first time this past December with her church family at Victorious Life Family Worship Center in LaPlace.

There is no testimony without a test. Minister Peggy Joseph knows that all too well after enduring three years of challenges that tested her faith at every turn.

Months after a stroke left her at death’s door, Joseph shares her testimony of healing to show others that every tragedy and triumph in life is part of God’s greater plan.

Joseph’s trials started in 2019 with the passing of her 88-year-old father on April 1. She coped well knowing that her father lived a long, full life, but she wasn’t prepared for the onslaught of grief that would hit her three months later when her 19-year-old granddaughter drowned on a family beach vacation.

Jayla Nicole Tassin graduated from East St. John High School in 2019 with a 30 on her ACT and aspirations to work in the medical field as an OB-GYN. She was two weeks away from starting a new chapter at the University of Louisiana at Lafayette when she tragically passed away.

More than just a Grammy and granddaughter, Joseph and Tassin were best friends with an unbreakable bond.

“She was just a joy. She was my heart,” Joseph said. “I’m a prophetic intercessor. I take phone calls all the time to pray for people. But when my granddaughter died, my flesh took over. I became angry with God because I couldn’t understand it for the life of me.”

It took time for Joseph to get to a state of acceptance and repent. In turn, God gave her strength to take care of her son, Benny, as he grieved his daughter.

“When I think of her now, I think of the fun times, like how she would jump on my bed to get on my nerves. I would make her stand on my bed and close my vent for me because I didn’t like it. Now I see Benny close the vent the same way Jayla did, and I see her,” Joseph said.

The entire family was still grappling with the Jayla’s loss when the COVID-19 pandemic rocked the world. Joseph was among the first individuals in St. John the Baptist to be hospitalized with the virus in March 2020, before medical professionals understood the extent of symptoms or how to treat the illness.

After around two weeks in the hospital, Joseph was on the road to recovery, back at home and adapting to living in a pandemic.

The Delta variant was still surging in August 2021 when Hurricane Ida struck Southeast Louisiana, presenting a monumental hardship for thousands of residents impacted by the storm. For Joseph, August 2021 presented an entirely different set of challenges.

August 20, 2021 started out like any other night. Joseph was in good spirits as she cooked, cleaned the kitchen, took a shower and settled down to watch some television. When her daughter called at a quarter till 10, the unthinkable happened.

“I answered the phone, but my daughter said I was talking out of my head. She couldn’t understand anything I was saying. Then she heard gagging,” Joseph recalled. “She called the ambulance and told them to meet her at my house. They found me on the floor in vomit. When they picked me up, my blood pressure was 200 over 218. I should’ve been dead right there.”

Joseph slept through the next few days without waking as doctors performed extensive tests.

“Everybody in that hospital saw death on me. They never thought I would pull through,” Joseph said.

Prayer warriors took shifts around the clock to ensure someone was always by Joseph’s side.

Chicago-based gospel singer Lemmie Battles was already traveling to LaPlace to sing at church when she learned Joseph was in the hospital. Battles knew just what to sing to wake her up – “Holy Ghost Power,” the same song she performed two years earlier at Jayla Tassin’s funeral.

Sure enough, once Joseph heard that familiar tune, she started humming along. She finally came to on her fourth day in the hospital, much to the relief of her loved ones.

Yet, the fight wasn’t over. Joseph was awake, but she had no recollection of who she was. She couldn’t recall the names of her husband or children, and no one knew if she would ever be able to speak again.

“I start crying just looking at the videos of me from that time,” Joseph said. “When I starting talking, nothing made sense. I remember it sounded like the people around me were talking in a language I couldn’t understand.”

Joseph encountered another setback when she suffered a seizure during her hospital stay.

The initial days were rough, but Joseph’s condition steadily improved as August gave way to September. First came mumbled words, then slurred sentences she could piece together if she thought about it first. She couldn’t conjure up enough words for lengthy prayers, but one Bible verse cycled through her thoughts throughout her hospital stay: “I shall live and not die.”

Doctors came to learn that Joseph was a birthday fanatic, and her ability to recite the birthdays of nurses she has only met once before assured them that her memory would make a full recovery.

On September 5, Joseph was able to return home, which had thankfully been mostly spared by Hurricane Ida. The recovery process involved physical therapy to learn how to walk again. Months later, Joseph is still not walking perfectly. She’s on medication to help the right side of her body function the way it did before, but she’s thankful for every day, and the healing process hasn’t stopped her from being an active volunteer in her community.

At the end of 2021, the Victorious Life Family came together to hear Joseph’s testimony and celebrate her healing.

Less than four months earlier, her loved ones thought they would be gathering for a funeral. Joseph’s testimony was a similar type of gathering, with plenty of visitors and friends standing up to share how Joseph has impacted their lives. Several reflected on how Joseph always goes out of her way to help those in need, whether it involves lending money during hard times or something as simple as delivering a home-cooked meal.

“Why do we need to wait for a funeral to tell someone what we love about them? That’s why I had a living funeral. We need to celebrate people while they’re still alive,” Joseph said.

She proudly shares her story to remind others to never give up, even when it seems like the odds are stacked against them.

“This was a warrior’s triumph. I got through it by the grace of God,” Joseph said. “Things happen in people’s lives where they feel like they are at the end of the rope, but you’re not. You just have to keep faith.”