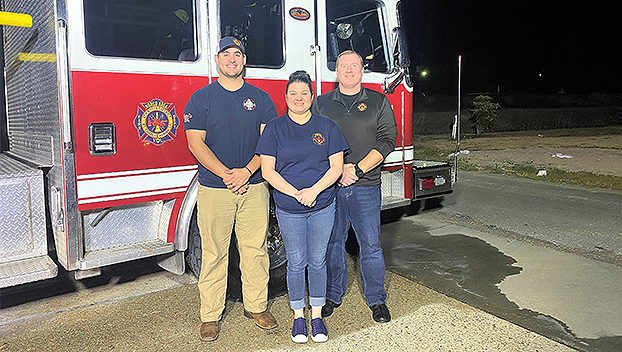 NORCO — Three volunteer firefighters are being honored for their bravery, swift response and lifesaving actions during the rescue of a 54-year-old man from a trailer fire in December 2021.

Lieutenant Michael Wright, Medical Officer Natalie Wright and Firefighter Blake Estevez, all volunteers with the Norco Area Fire Department, were notified of a structure fire on Good Hope Street the evening of December 9.

Fire Chief Kenny Wenning Jr. was the first to travel to the area to size up the scene. After the Fire Department was initially given the wrong address, Wenning smelled the fire while passing down Apple Street. He made a loop down Good Hope and informed incoming units of large flames and turbulent smoke coming from a single-wide trailer.

Around two dozen non-English speaking residents were gathered outside, and the language barrier made it difficult to gather information. Responders decided to treat the scene as a rescue until determined otherwise.

Once inside the trailer, Michael Wright took over suppression operations, and Estevez began a rescue sweep of the area. He almost immediately located a victim lying prone in the living room of the trailer, with burns covering areas of his arms, chest and face. The kitchen on the east side of the trailer was fully engulfed in flames, and the entire single-wide was filled with heavy smoke.

Michael Wright placed the nozzles in a wide spray pattern to add a barrier of protection from the quickly encroaching fire as he and Estevez lifted the victim and removed him from danger.

It’s difficult for Wright to recount thoughts that raced through his mind in that moment.

“Your priorities shift as soon as you find a victim,” he said. “There was no asking, ‘What do we do?’ There was no lollygagging or indecision. There wasn’t a lot of thinking. Things progress very, very rapidly. All of it happened in the span of 90 seconds, two minutes at the most.”

Once the victim was carried outside and placed on a gurney, Medical Officer Natalie Wright immediately began administering lifesaving treatment. Working through the added complication of swelling from the victim’s facial burns, Natalie Wright managed to place an airway into his trachea and stay with him until medical treatment was passed on to EMS personnel.

According to Michael Wright, firefighters initially feared the worst about the victim’s prognosis based on how critical the situation was. Since then, they have continued to receive weekly updates. The road to recovery will be long, but the future is looking bright. The victim is now alert and breathing on his own thanks to the timely response of the first responders who saved his life.

“Without the talent and experience of these firefighters, there surely would have been a loss of life as well as a complete loss of property, and possible exposure of other residents to danger,” Wenning said. “Their heroism exemplifies the purpose of the fire service. A grateful community thanks them for their actions and applauds them for their service.”

Lifesaving responses don’t happen every day, Wenning said. A successful rescue is a rare event, especially under the circumstances these firefighters faced.

“Normally it’s a recovery, especially when the fire is in a trailer. Making entry on a mobile home is a lot more dangerous than making entry on a house. It’s more enclosed and holds a lot of heat. It doesn’t take long for a trailer to burn up,” he said.

Wenning commended his entire team for the response. The rescue would not have been possible without every team member doing their job in a timely manner. From hose deployment to hooking up the unit to a hydrant, it took a myriad of support to get the job done.

According to Michael Wright, “The good thing about St. Charles Parish is that everybody works well together. It really is that ‘One Team – One Fight’. We may wear different uniforms, but our goal is the same, and that’s to save lives.”