Francis Cogan Fulton, Jr a lifelong resident of St. John Parish passed away on Tuesday, February 8, 2022 at the age of 75. 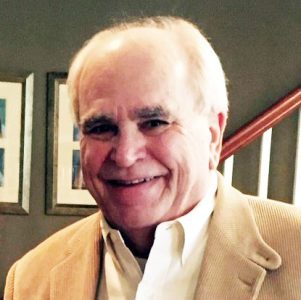 Cogan was a proud graduate of St. Paul’s Catholic School in Covington, Louisiana where he spent four very memorable years as a boarder.  He graduated from the University of Southwestern Louisiana and then returned to St. John Parish making his permanent home with his wife Donna Lynn in Reserve as members of St. Peter Catholic Church.

Cogan loved the community of St. John Parish and was passionate about keeping it’s history alive through stories shared with his family and friends. If you wanted to know the origin of a building or the face in a photograph, Cogan was the person you called.

For many years he served the people of the community as manager of the Bank of St. John where he enjoyed interacting with the residents.  Following his banking career he joined his father in the real estate appraisal business.

Cogan and his wife of 53 years were instrumental in the revitalization of the St. John Community Theatre.  While serving as a member of the initial board, he and his wife enjoyed participating in numerous summer productions.  Many will remember seeing Cogan and Donna dancing to “Shall We Dance” as Anna and the King in the musical The King and I.

He was preceded in death by his parents Francis Cogan Fulton, Sr. and Bernice Marie Ory Fulton.

Cogan lived his life for his children and grandchildren, his self professed greatest accomplishment.

The family will receive relatives and friends at St. Peter Catholic Church on Friday, February 11, 2022 at 10:00 am followed by a Mass of Christian Burial at noon. Cogan will be interred at St. Peter’s Catholic Cemetery.

In lieu of flowers, masses are preferred or donations may be made to the chapel at Ursuline Academy in New Orleans.