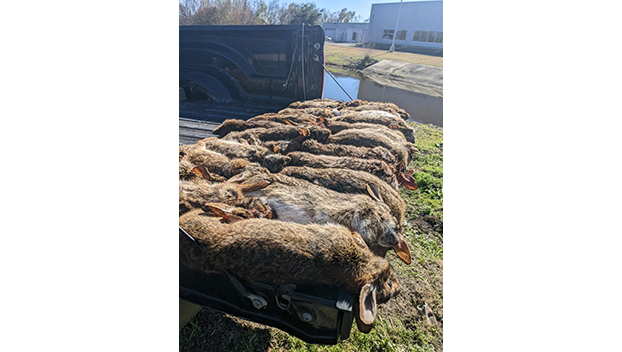 Agents cited Marvin DuPuis, 57, of Meraux, and Robert Mullet, 47, of Metairie, for taking over the limit of rabbits.

Agents received a complaint about multiple subjects observed hunting behind a car dealership in New Orleans East.  LDWF agents and New Orleans Police Department (NOPD) officers arrived on scene where they observed two pick-up trucks parked near the wooded area.  Both pickup trucks contained several dead rabbits in the bed or interior of the trucks.

The agents then searched the woods for the men and found eight additional rabbits.  The agents also set up surveillance and observed the two subjects actively hunting and killing several more rabbits.

After making contact with the men, agents found the men possessing 24 rabbits that they admitted to taking that same day.  The daily limit of rabbits is eight per licensed hunter putting the men eight over the daily limit.  Agents seized the rabbits and donated them to a local charity.

Taking over the limit of rabbits carries a $250 to $500 fine and up to 90 days in jail.  The subjects may also be charged civil restitution totaling $253 for the replacement value of the rabbits.