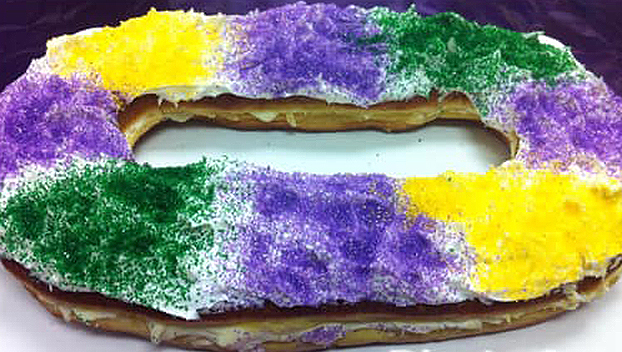 HAMMOND — Hurricane Ida devastation forced The Donut Hole in LaPlace to shut its doors after 30 years in business. Now, locals are flocking north to Hammond to satisfy their Mardi Gras king cake cravings.

Doughlicious Donuts owner Mark Barker welcomes the influx of customers from St. John the Baptist Parish, and he said the connection between Doughlicious and The Donut Hole runs deep.

After all, both family businesses have a long history of serving Southeast Louisiana.

While Doughlicious has been in Hammond for 10 years, the roots of the business extend much further. Barker’s father, Aaron Barker, got into the donut business 52 years ago when he opened the first Dunkin Donuts franchise in Louisiana. After 20 years with Dunkin, father and son went independent with a donut shop called “Aaron’s.”

Mark Barker was working with his father in Chalmette when Hurricane Katrina struck in 2005 and put a pause on their business.

“Jim Planetta, owner of The Donut Hole, knew my dad, so I applied there and he hired me. We became best friends,” Barker said. “I worked there for two years and three months, and then I went back to Chalmette and opened up Barker’s Dozen.”

Barker’s Dozen did well, but it wasn’t the booming business Barker had hoped for. He was living in Ponchatoula when he opened Doughlicious Donuts in Hammond 10 years ago, and he hasn’t looked back since.

Barker and Planetta remain best friends, despite their age difference of 15 years. By the time Hurricane Ida hit, Planetta had taken a step back, with his daughter Kristie Planetta Guzman and granddaughter Madison Jackson assuming the day-to-day operations of The Donut Hole. Yet, the businesses retained a strong family connection through the years, and that impact is continuing to shine to this day.

On Monday afternoon, Barker spoke on the phone with another customer picking up 80 king cakes to bring back to LaPlace. Such large orders haven’t been uncommon in recent weeks.

“It’s been good. I’ve talked to Jim about it,” Barker said. “We extend our hours for king cake season, and it’s good for this year because we have so many people coming from LaPlace. It’s been busier in the evening times. We’re glad we can help LaPlace by serving them.”

River Parishes native Tricia LeBoeuf-Cancienne has made regular trips to Doughlicious Donuts this month to transport king cakes to Don’s Country Store in Reserve each Tuesday and Thursday. What started with a group of people asking for donut king cakes on Facebook has grown into a way for small businesses to support one another while uplifting a community that has been greatly impacted by a natural disaster.

There always seems to be a line of people waiting for king cakes at the door. Last week, LeBoeuf-Cancienne had to make two trips to Doughlicious in one day because the first batch of king cakes was cleared out within 20 minutes.

“We’re letting the community know there’s still something positive. We’re a small store, but we want to do what we can to help the community get back into the Carnival spirit,” LeBoeuf-Cancienne said.

She added, “I love the taste, but it’s a favorite not only because of the flavor. I think it represents LaPlace. It reminds us of when everybody would congregate at The Donut Hole and see familiar faces. It’s a feel-good king cake.”

In addition to the plain and filled donut king cake selections, Doughlicious also offers traditional king cakes that are braided and baked with cinnamon.

“The donut outsells the baked, but it’s a close race,” Barker said. “We have the best of both worlds.”

Doughlicious Donuts is open from 5 a.m. to 3 p.m. on Saturday and Sunday and from 5 a.m. to 6 p.m. Tuesday through Friday during king cake season. The store is closed on Monday.

Meanwhile, there’s still hope for locals to see the revitalization of The Donut Hole, though it might not be in LaPlace.

On January 1, owner Kristie Guzman posted the following update to The Donut Hole’s Facebook page: Watch out LIVINGSTON because The Donut Hole part 2, “the RISING” is in the making!!

Further updates will be posted on The Donut Hole’s Facebook page.