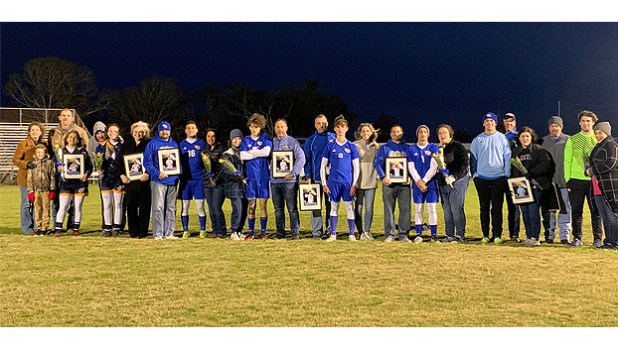 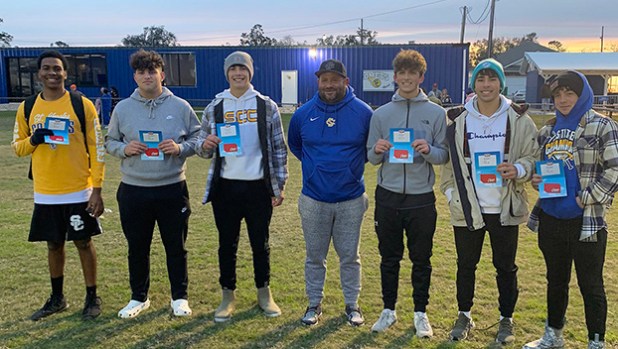 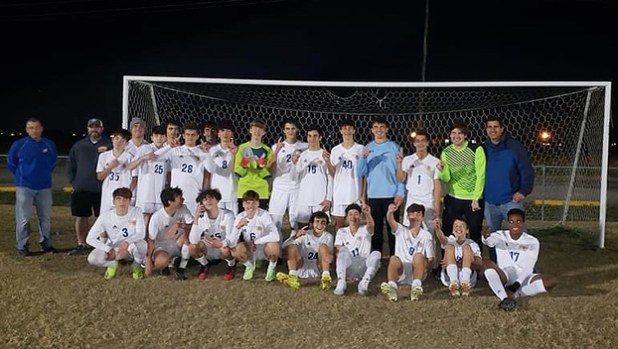 Led by coach D.J. Chauvin, the boys soccer team at St. Charles Catholic earned a spot in the playoffs by clutching its first district championship since 2016.

LAPLACE — Hurricane damage to stadium lighting prevented St. Charles Catholic’s soccer teams from playing nighttime home games for most of the season, but that changed last week with a tremendous show of support from the Comet family.

School administration rented lights for Senior Night, which culminated in victories for both the boys and girls teams in a double header versus St. Martin’s.

According to boys soccer coach D.J. Chauvin, Comets who cheered on the boys and girls teams also had a chance to earn prizes in a soccer shootout against SCC Athletic Director Wayne Stein.

“Not only did the school get the lights that night; they also got students to come out and pushed a strong attendance,” Chauvin said. “It was a really good showing from the students and excellent support from the school administration. I don’t know if we could have come out with a victory without that much energy.”

Seniors Carter Chauvin, Bryce Bertucci, Caden Barrios, John Decker, Ethan Seymour, Zack Vicknair, Lauren Oncale and Mya Voiron were honored with plaques during the senior night celebration. There was even more to celebrate when the boys and girls collected 1-0 and 8-0 wins against St. Martin’s, respectively.

The St. Martin’s Episcopal boys soccer program is a top team in Division IV, but the Saints didn’t have what it takes to overcome the Comets’ defense on their home field last week. A pass from Carter Chauvin allowed junior Michael Hotard to shoot the ball straight off the corner for the Comets’ one and only goal of the night.

The boys entered this week with an 11-5-1 record and the first District championship since 2016 under their belts. While three games remain in the regular season, the Comets have already earned a spot in the LHSAA playoffs.

This year features the biggest squad in recent history for the boys soccer program with a staggering 37 players. The junior and senior leadership is strong, and with a huge eighth grade class, the future looks bright.

Chauvin has depended heavily on the six seniors on the team. His son, Carter Chauvin, is a five-year starter as a varsity player. He’s a big leader on the team both in the huddle and in the locker room, and he fosters the future success of the team by taking younger players under his wing.

“Carter has played central midfield for us and did a good job distributing the ball. This year, he’s switched to forward, and he’s taken on that role really well,” Chauvin said. “He’s a huge threat that all four defenders on the back line have to account for at all times. He causes chaos for the opponent’s defense.”

Bryce Bertucci has done an excellent job at forward this season.

“He’s been playing for the last four years and has always been a very quick guy. He’s a big threat. When we play other teams, they have to account for his speed,” Chauvin said.

Stepping up as a leader, Bertucci makes sure his teammates have their heads in the game. His motivation has on more than one occasion pushed the team to the win in games that might have otherwise ended in a tie or a loss.

Caden Barrios is a back line player who serves as the Comets’ emotional and physical leader on the field.

“He’s 100% heart, and he’ll run through a wall if you ask him to,” Chauvin said. “He plays very aggressive and wins a lot of balls for us.”

Zack Vicknair was a newcomer to the team this year, but he proved to be a quick study who easily learned the flow of the game. Vicknair has had plenty of great saves this season, coming in clutch in moments that could very well change the outcome of the game.

John Decker is another back line player who has been on the soccer team for three years. He’s a skilled player with speed and good judgement. Chauvin was especially impressed by his grit when he fought his way back from an injury this year.

Last but not least, goalkeeper Ethan Seymour was initially unsure whether he wanted to play. Mentally, he committed himself to becoming the best he could be.

“Every day he comes out he works hard. You can see it on his face before games and during games that he’s all in. I’m super proud of him,” Chauvin said.

Meanwhile, SCC girls soccer coach Travis Trepagnier said this season has been “pretty inconsistent” when injuries and COVID are taken into account. The girls entered the week with a 6-12 record following last week’s 8-0 senior night win against St. Martin’s Episcopal. Two games remain in the regular season against North Lake Christian and Academy of Our Lady.

“We haven’t really found an identity yet,” Trepagnier said. “We’ve got a lot of underclassmen. We graduated only four seniors last year. I have two seniors on the team this year, so we won’t be losing a lot of experience this year. We’ll bring a lot of experience back next year, but I do wish we wouldn’t have to wait to rebuild because there is talent on the team this year. When they do hit their stride, they play pretty well.”

Sophomore Mia Ganote is the leading scorer on the team, and Trepagnier knows he can count on her to lead the team in years to come. Other leaders on the team expected to return next year are Joy Bartholomew and Sara Beth Sirmon. Goalkeeper Mia Oncale has also been a strong member of the team this season despite being sidelined with injury the past few weeks.

Trepagnier is proud of seniors Lauren Oncale and Mya Voiron, who were each honored last week during senior night.

“These girls are very committed all of the time,” Trepagnier said. “Whether it’s a lot of playing time or a little playing time, these girls have always been committed to what’s best for the team. That’s their leadership and contribution to the team. I couldn’t ask for more than that.”