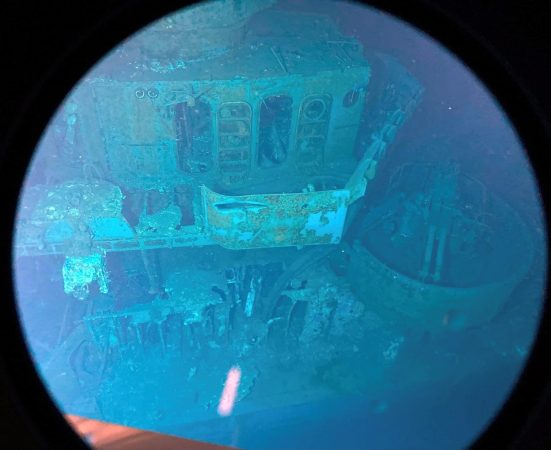 In 2021, Mr. Stephenson teamed with adventurer Victor Vescovo in the DSV Limiting Factor to locate and survey the World War II shipwreck USS JOHNSTON. The JOHNSTON, a Fletcher-class destroyer just like USS KIDD, became famous for her heroics in the Battle off Samar in the Philippine Sea. She and a few light ships engaged Japanese battleships and cruisers and helped stop them from attacking U.S. landing forces.

USS JOHNSTON’s wreck at 21,180 ft. is the deepest surveyed shipwreck. Mr. Stephenson’s presentation details his process to research and locate the JOHNSTON and includes images and video of the shipwreck.

Parks Stephenson is an historian, documentarian and explorer for Zocon Entertainment. A graduate of the U.S. Naval Academy and career Naval Flight Officer, he has served aboard submarines, aircraft carriers and amphibious ships, ultimately commanding a multi-service Air Control detachment in Kuwait during Iraq’s second attempted invasion of Kuwait.

As a direct-report project manager to undersea explorer James Cameron, he directed a team of naval architects in the production of a peer-reviewed finite-element model analysis of the RMS Titanic sinking. He has co-authored (as technical advisor) and illustrated the book, “Exploring the Deep: The Titanic Expeditions” with James Cameron.

Mr. Stephenson served as lead investigator and forensic analyst in a multi-national investigation that discovered a Japanese submarine wreck off Pearl Harbor that changed the history of the 1941 attack.

Focusing on historic research and forensic re-construction, Mr. Stephenson specializes in military and maritime areas where he can apply his personal experience. He has been an advisor or on-screen talent in 27 (producer in three) televised documentaries about deep-sea shipwrecks.

Admission to the presentation is free, but seating is limited. Email reservations@usskidd.com or call 225-342-1942 x13. Sponsors for this event are Hotel Indigo Baton Rouge Downtown and the Louisiana Veterans Museum Foundation.

KIDD Keynotes is a free series that aims to inform the public of various challenges faced and sacrifices made by veterans and their families, as well as educating the public on a variety of historical topics.

USS KIDD Veterans Museum is open daily 9:30 to 3:30 and is on the Riverfront in Downtown Baton Rouge. For more information, visit the website at www.usskidd.com or phone 225-342-1942.