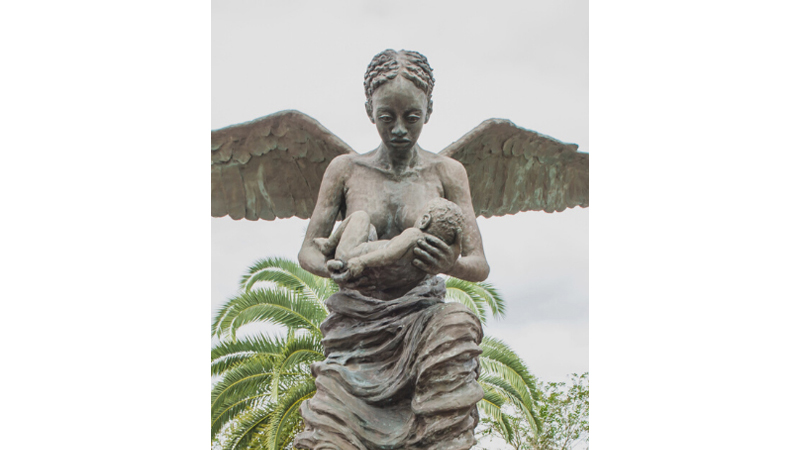 A statue is seen at Whitney Plantation, a museum focused on interpreting slavery at 5099 Highway 18 in Wallace.

WALLACE — Whitney Plantation, the first of only two plantations in the country that centers the lives of the enslaved and the only one in Louisiana to almost exclusively interpret slavery, received almost 4,300 signatures from visitors and supporters who oppose the grain terminal proposed for the small community of Wallace.

Whitney Plantation posted an appeal requesting followers to “protect Whitney Plantation” by signing a petition to the Corps of Engineers. The post referenced the perceived threat to Whitney’s historic structures, including original cabins, the original Antioch Freedmen’s Church, and the 18th Century Big House. According to Dr. Joy Banner, director of communications at Whitney Plantation and Wallace resident, the noise, traffic, dust and smells associated with grain terminals could hurt visitation and could threaten the jobs of 24 individuals.

Whitney’s almost 90,000 social media followers signed the petition and quickly shared it. The original goal was to obtain 1,000 signatures, but within a day the total signatures had tripled. With the increasing awareness of environmental racism, followers not only expressed their outrage at the threat to Whitney, but also to the destruction of the predominantly Black and descendant community of Wallace. Anika Noni Rose, the voice of Disney’s Princess Tiana and Jamie Lynn Spears, the sister of Britney Spears, shared the post.

Banner believes that the outpouring of support indicates the interest in African American history and the potential to grow an even more robust tourism industry that would safely employ community members.

“The land proposed for the grain terminal is documented to contain civil war artifacts. During the Civil War, Black Union Troops were concentrated in this area, making those artifacts very likely those of freed slaves who fought to end slavery,” Banner said.

She added, “There is literally no other place in the world that offers this opportunity, yet our administration, parish economic development and even our tourist commission have not fully engaged with this potential.”

In recognition of the economic success and potential to grow a robust tourism industry that would provide safe and clean jobs, the St. John the Baptist Parish Council including District 2 councilmember Kurt Becnel and now Parish President Jaclyn Hotard voted on an ordinance to create a historic district that includes the River Road of the West Bank. Dr. Joy Banner is also Kurt Becnel’s appointment on the Historic District Commission.

“The council made a wise decision to create a historic district because of the extensive amount of unique historical artifacts, structures, and unique cultural landscape that has created a strong tourism industry. To allow a massive grain terminal that would destroy our historic district and wipe out the opportunities for safe clean jobs is counterintuitive and a waste of resources the parish has already invested in creating a historic district,” Banner said.

Banner is also alarmed by the potential that the site contains one or more unmarked cemeteries of the enslaved. Greenfield Louisiana has conducted an archaeological study that did not locate any unmarked burial grounds on the site. Dr. Ryan Gray, associate professor of anthropology at UNO and historical archeologist wrote a letter to the Corps of Engineers, calling the shovel tests used by Greenfield’s research firm, Gulf South Research Corporation (GSRC) “completely inadequate to locate burial shafts or unmarked graves.”

Gray added that “only intensive survey methodologies combining remote sensing and mechanical stripping with community-engaged historical research and topographic analyses have been demonstrated to be effective at identifying the boundaries of cemeteries in similar cases.”