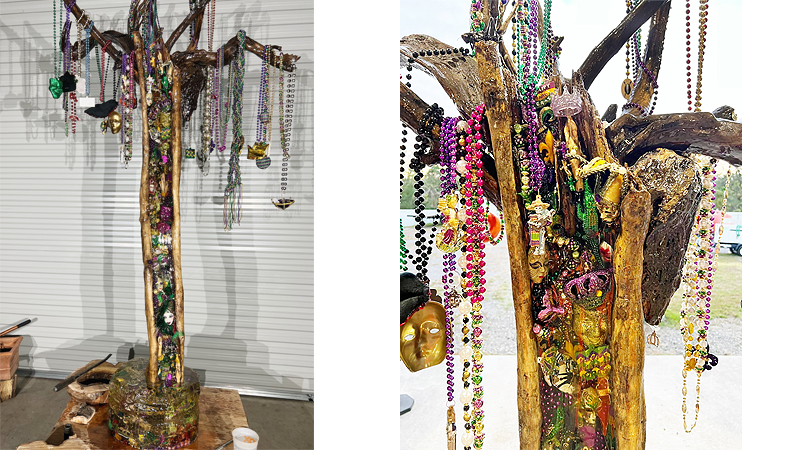 NEW ORLEANS — A piece of driftwood recovered from the Mississippi River in Norco has been transformed into a sculpture that embraces the spirit of Mardi Gras in Southeast Louisiana.

Local artist Mike Martin said his Mardi Gras tree has been more than two years in the making. Captured in resin along the length of the tree are Mardi Gras beads, parade trinkets, crawfish shells, king cake babies, tiny trumpets and other items reminiscent of New Orleans culture.

“To see it is to love it,” Martin said. “It’s not something you can put in a corner. It’s definitely a centerpiece, something that has to go in the middle of the room for you to really get the full effect of it.”

When Martin first moved to Louisiana 10 years ago, he had no idea how many traditions were wrapped up in the annual Mardi Gras celebration. Friends educated him on the different krewes and their signature throws – everything from shoes to purses and coconuts. Martin was walking back from a Bacchus parade the first time he saw Mardi Gras beads dangling from a tree like willow leaves, a whimsical sight that inspired something within him.

It took several years for that feeling to be brought to life through art. While walking along the Bonnet Carré Spillway in Norco, Martin was drawn to a particular piece of driftwood trapped on land after the waters of the Mighty Mississippi had receded.

“I do a lot of work with industrial materials – screws, bolts, metal, things of that nature. It was just so interesting to see the driftwood and what it looked like after its journey through the river. I found a piece that spoke to me, and I held onto it for six or seven months,” Martin said. “One day, the idea just popped. This would make a great Mardi Gras tree. It blossomed from there. I’m a strong believer in not rushing through a piece, and just giving it as much time as you possibly can so it eventually evolves into what it’s supposed to be.”

Martin has always had a love for art. While living in Harlem in the 90s, he started out sculpting with marble recovered from demolished buildings. He later moved to Long Beach, California and went to college for oceaneering. As his career in environmental solutions brought him in contact with chemical plants and refineries, his materials of choice shifted to metal pieces and industrial supplies.

Martin’s artistic focus has continued to be influenced by his surroundings in Southeast Louisiana.

Martin doesn’t have any plans in mind for displaying the Mardi Gras tree. He simply wanted to create it. It’s currently sitting in his shop, and he’s already planning his next themed artwork – a Mardi Gras tower made from bottles.

“I’m always putting things together, just looking at things and realizing what could be. I’ve started to look at the world a little differently. If you think about it, everything is art,” Martin said. “The environment here is so rich with art and culture. You just can’t help but be creative somehow.”