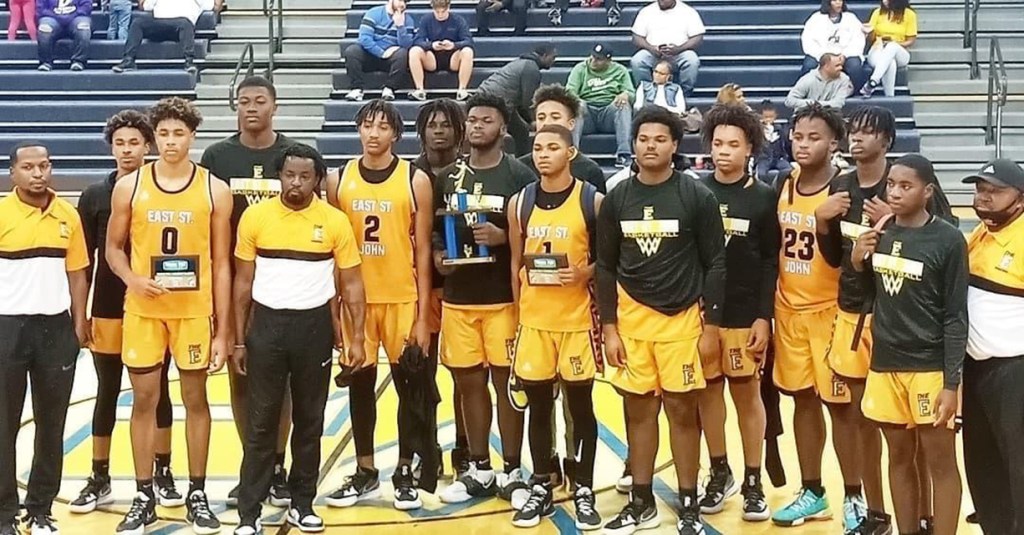 RESERVE — The East St. John boys basketball team has faced every challenge with bravery and tenacity despite being separated from their home court this season.
Basketball has become a sense of normalcy as local families grapple with the aftermath of Hurricane Ida. Head coach Antonio Broadway Sr. said the boys quickly made the Leon Godchaux court a home away from home and picked up right where they left off last season.
“The E” entered this week with a 12-1 record following a blazing start to the season with 11 consecutive wins.
“We’re not on our campus, but we’re finding ways to win. I think what’s most important is they are buying in. They have the same tenacity from last season. They won a lot of games last year, and they have the same mindset now. They’ve just stepped it up a notch as they are a year older now,” Broadway said.
The team is laden with leaders despite having only four seniors, including Kylon Harris, a dual sport athlete who recently accepted an offer to play football at Stephen F. Austin University.
Harris is the leading scorer on the basketball team, averaging 19 points per game. Broadway said seniors Jabari Bolden and Bryce Gilyot have turned it up a notch this season, averaging 14 points per game. Alongside them is Amir Rios, a junior averaging 12 points per game.
One of the highlights of the season thus far was defeating Division I state champion St. Augustine 61-50. Heading into this week, the boys were gearing up for a big challenge against Zachary, the defending 5A state champion. District is right around the corner at the beginning of January, and The E will need to bring its ‘A’ game to overcome Destrehan, Lafourche, Thibodaux and Hahnville.
“We have a tough schedule ahead of us. The boys are responding very well, and our biggest thing is staying consistent,” Broadway said. “The guys have a lot to be proud about. We’re just going to remain humble and keep working.”