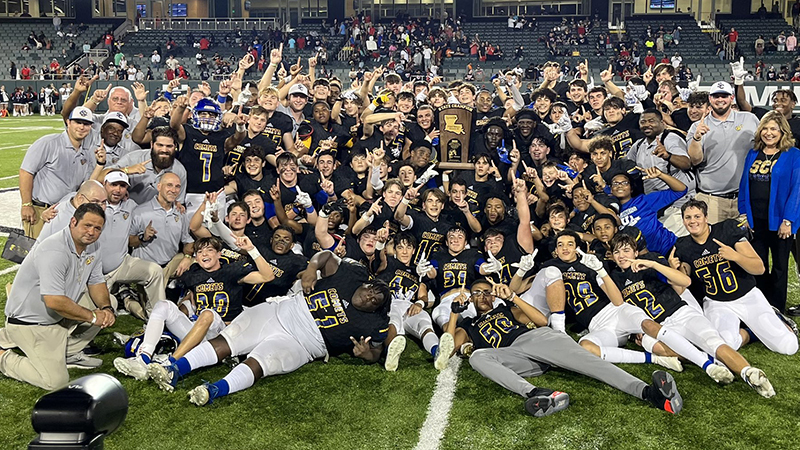 It was St. Charles’ seventh championship appearance in 15 years and the third consecutive year of facing the Knights in the finals. The third time was the charm as the Comets made a huge statement on the Tulane field, but first-year head coach Wayne Stein said it wasn’t the opponent that made this championship victory so sweet.

This season was bigger than football. It was a testament to the resiliency of a team facing the aftermath of one of the worst hurricanes to ever strike Southeast Louisiana.

Stein said football was the one sense of normalcy that the kids had, and they stuck together through it all, even when schools were shut down and their homes were left without power for weeks. Three months after the storm, many families remain displaced.

During an undefeated season with some of the best defensive play the River Parishes has ever seen, the boys did everything they could to make their hometown proud.

“It was special. The fact that we knew exactly what we were getting into gave us an opportunity to be able to win. Being able to be a state champion really had nothing to do with who it was against. I think my kids, with everything they went through, were just phenomenal. They fought all year, and it was a special group,” Stein said. “I think our kids really represented the River Parishes well. They were a very gritty group. They never panicked all year. I hope this is a group that not just the St. Charles Catholic community can be proud of, but everybody in the River Parishes that is dealing with something from Hurricane Ida can be proud of.”

Sophomore Kyle Cannon was named the MVP of the game, as well as the Prep Player of the Week in the New Orleans area. During the championship, Cannon led his team with 11 tackles, recorded an interception and recovered a snap on a punt attempt.

Stein was also impressed with the performance of Nicholls State commit Kaiden Jones, who moved from defensive end to linebacker and played extremely well all season.

“He’s a large reason of why we are sitting here as state champions,” Stein said.