Santa is back in town: Russ Wise recounts 20+ years of Christmas visits 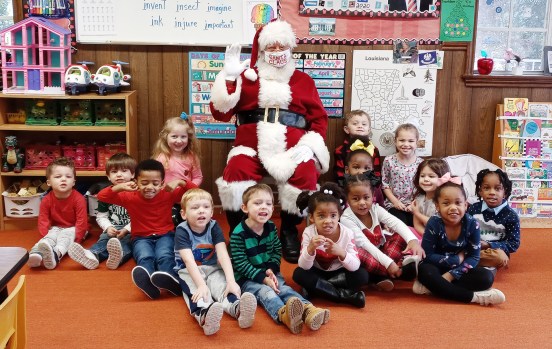 Russ Wise appears as Santa Claus to the 4-year-old class at Joan's Daycare-Pre-School LLC in LaPlace. 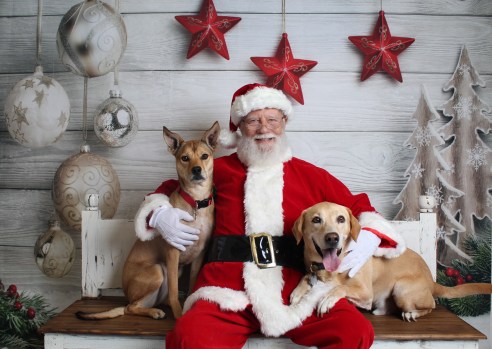 LAPLACE — More than 20 years ago, Russ Wise grew out his white beard for the first time in preparation for a role in a Biblical play. It was still quite short when he walked into the St. John the Baptist Parish Sheriff’s Office and heard public affairs officer Za Maurin call out, “Here comes Santa Claus!”
“Yeah, Ho, Ho, Ho,” Wise responded, but Maurin said, “No, you don’t understand. We have a red suit and need someone to wear it.”
It was so much fun that Wise, a School Board member at the time, bought his own red suit and announced that Santa was available for classroom visits.
Over the past two decades, Santa has been everywhere from schools to nonprofit functions and hospital NICUs. The COVID-19 pandemic taught old Santa some new tricks as he went high-tech with virtual visits to schools as far away as Indianapolis. Another first during the 2020 Christmas season was Santa’s appearance at a 50th anniversary drive-by parade.
No matter the time, the place or the challenges the community is facing, Santa’s visits always come free of charge. Wise is driven not by profit but by a love for seeing smiles stretch from ear-to-ear every time Santa makes an appearance, and he’s grateful that this year will bring more opportunities for in-person connections.
“In past years, starting as early as the Saturday after Thanksgiving, Santa has had every day in December filled up, up to the 24th. COVID is still having its effects and the hurricane is having its effects, but Santa is quite happy that so many people are planning Christmas events this year,” Wise said.
Santa’s calendar always includes stops at Joan’s Daycare & Preschool and the Wee Care Center at First Baptist Church of LaPlace. For the better part of 20 years, he’s made annual appearances at the St. Charles Parish Animal Shelter for a holiday photo fundraiser.
Santa doesn’t attend private parties unless there is a compelling reason. One exception to the rule is Lori Bercegay’s annual Christmas party for children with special needs.
Wise also loves to spread holiday cheer to families enduring tough situations. Last year, Santa paid a special visit to a little girl named Journee who was recovering from a kidney transplant at Ochsner Baptist Hospital.
Visiting area hospitals has been one of Wise’s favorite experiences as Santa. In the past, he has surprised new mothers during visits to the neonatal unit. It was special seeing several Christmas Eve babies, including a newborn set of twins in the NICU. Santa posed behind them for some photos, and a year or so later received a letter from the twins’ parents about what it meant to them.
Santa has been invited back to the New Orleans Mission for a toy giveaway and a Christmas meal distribution for the homeless. This year, he is also partnering with the St. John the Baptist Parish Sheriff’s Office at the request of Sheriff Mike Tregre to take photos with local children at the Lloyd B. Johnson Law Enforcement Training Center in LaPlace.
For the past 15 years, Santa’s last stop before going back to the North Pole has been a midday interview on WWL radio on Christmas Eve, first with Angela Hill and later with former Jefferson Parish Sheriff Newell Normand. Children are encouraged to call in during the show and tell Santa what they want for Christmas.
With every visit, Wise keeps the magic alive by never breaking character, even around adults. He makes sure that children understand Santa can’t promise they will get the present they wish, but he will try his very best.
A few Christmas wishes from over the years stand out. A couple of girls shared that their Mama was sick and asked if Santa could bring anything special.
“Every once in a while, and it doesn’t happen often – maybe four, five, six times in all of these years – I’ve had kids say, ‘My brother is in the hospital’ or ‘My Daddy is in prison’. Things like that are real heart tuggers. You can’t help but tear up a little bit. You get cold chills and you just want to give them a hug. There are some kids out there who don’t think about themselves first. They think about what people need,” Wise said.
There is still time to book an appearance by sending a written request to santa@russwise.com.
Santa’s full 2021 schedule is as follows: