Prepping for playoffs: WSJ advances to Round 1, as Comets slide to quarterfinals 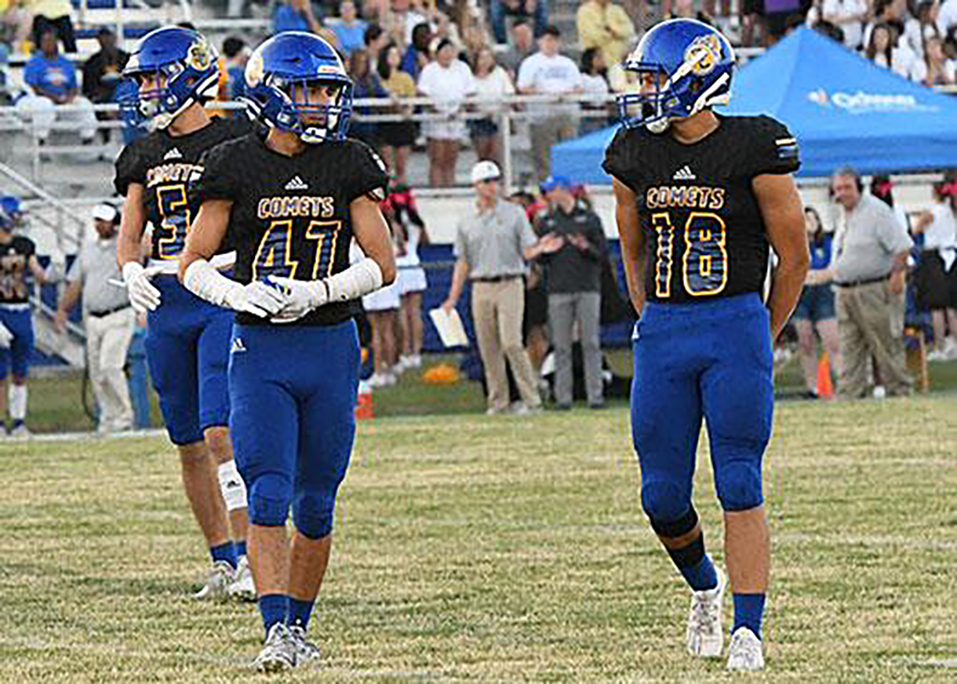 LAPLACE — St. Charles Catholic achieved a first round bye and is sailing into the quarterfinals of the Louisiana High School Athletic Association’s Division III playoffs.
The Comets will face the winner of this week’s game between No. 6 Dunham and No. 11 Holy Savior Menard during round two of the playoffs, scheduled for November 18-20.
St. Charles Catholic has dominated the prep football sphere this season with an 8-0 record and a nearly unstoppable defense that has only allowed three touchdowns the entire season. Vandebilt Catholic and Isidore Newman are the only two teams that have managed to score against the Comets this year, while the other six games resulted in shutout victories.
The Comets have seamlessly transitioned to the leadership of first-year head coach Wayne Stein, and they have braved the aftermath of Hurricane Ida without missing a beat. They have won eight games in seven different stadiums, truly putting the motto “anytime, any place” into action.
“They came out ready to play no matter who the opponent was. The negative of going 8-0, believe it or not, is that if you do lose now, it’s over. You don’t have that moment in the season where you can change this little thing so we don’t lose again. We really have been trying to self-evaluate everything that we’re doing, good and bad,” Stein said. “We’re not in this thing to go 8-0 or win a district championship. At St. Charles Catholic, you’re in it to try to win a state championship. That’s always the goal.”
Stein sees some similarities between this year’s team and SCC’s 2011 state championship team, which also went undefeated in the regular season and only allowed a handful of touchdowns to pass through the defense. However, Coach Frank Monica taught Stein that every team has its own pulse.
This year has included strong leadership on both sides of the ball. Zach Vicknair has never disappointed while moving from quarterback to running back. Dillon Brown stepped up as a leader on the receiver corps, and there are four talented seniors on the offensive line led by Mohammed Nabut. Defensively, a lot of guys with experience are led by Kaiden Jones, a Nicholls commit. Bryce Bertucci, Brock Dunn and Moses Clark have also played a big part in the Comets’ success, according to Stein.
“Our seniors have been phenomenal in their leadership and everything that they’ve been through, and I hope that they continue to have success throughout the playoffs,” Stein said. “They’ve really bought into the fact that it’s not about our opponent. It’s about us. Only we can beat us. In our division, there are no great draws.
“You have to go through the likes of a Dunham or an Episcopal or a Newman, Notre Dame or Lafayette Christian. You play the hand that’s dealt, and whoever plays the best is going to win.”
Meanwhile, across the river in Edgard, West St. John is preparing for round one of the LHSAA Class 1A playoffs. West St. John, a No. 12 seed, is slated to face No. 21 Block at 7 p.m. Friday night at Joe Keller Stadium in Reserve. If successful, the Rams will advance to face No. 5 Slaughter Community Charter in the second round of playoffs.
Both West St. John and Block had a slow start to the season, with Block earning its first and only win against Montgomery on October 29. West St. John ended the regular season with a 2-4 record, but first-year head coach Greg Johnson said records don’t matter once playoffs begin.
“Everybody is 0-0 right now. We just have to be able to minimize our mistakes and play smart football,” Johnson said. “We know Block is going to be a scrappy team. They are pretty young at certain positions, but they are well coached, they are disciplined, and they are going to be ready to play football. We’re just working on fundamentals and trying to minimize our mistakes. We’ve been turning the ball over a little too much. We have to play hard, we have to play fast, and we have to play smart. If we can do that offensively and defensively, as well as with special teams, we’ll be victorious.”
Despite being young at the skilled positions, the Rams have bought into the process and learned what the coaching staff expects of them. Johnson said the guys have been working hard on and off of the field and have been guided by the leadership of the more experienced players. Johnson said senior Jason August has been a standout on both the offensive and defensive line. Kailep Edwards, a graduating senior and ULL commit, has also provided valuable leadership as an all-state linebacker.
One valuable lesson this year resulted from a major setback. Tempers flared in the last 10 seconds of the October 22 game against Mentorship Academy, leading to a brawl that resulted in a forced forfeit the following week to Riverside Academy.
“I told the kids we can’t allow things like that to happen. We have to play the game, but we have to play within the rules of the game as well,” Johnson said. “The game of football has its highs and lows. It comes with the nature of the beast. You have to learn to play and learn how to control your emotions. It was a life lesson for us. We got over that, and we’re going to move forward.”