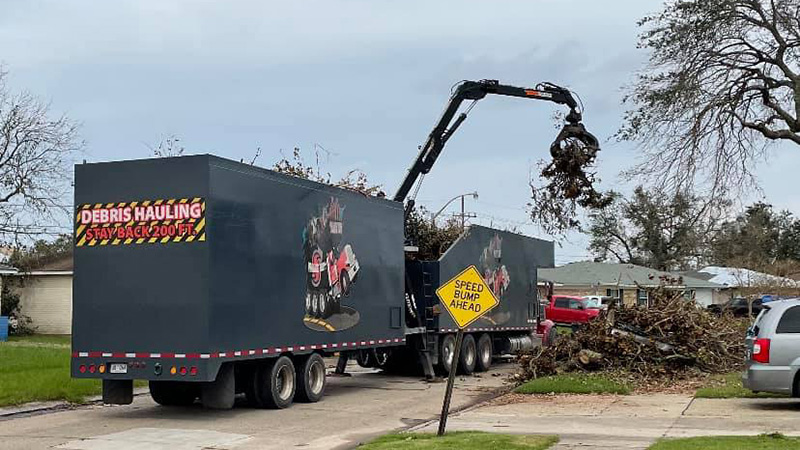 LAPLACE — Less than two months after Hurricane Ida cut a wide swatch of destruction through St. John the Baptist Parish, an effective recovery process has allowed streets to be cleared, blue tarps protecting thousands of homes from the elements and a gradual return to normalcy to begin.

Since late August, more than 750,000 cubic yards of debris have been picked up, according to Brian Smallwood, a regional representative for Mobile, Alabama-based CrowderGulf LLC. During a parish council meeting this past Tuesday night in LaPlace, Smallwood said as of Oct. 26, which was the 49th day CrowderGulf has been operating in the parish, the company has picked up 13,500 loads of debris.

Additionally, the company has cut more than 2,000 trees.

He said at the height of the recovery an average of 23,000 cubic yards were being picked up daily but that daily number has since dropped to about 10,000 yards.

Smallwood said CrowderGulf has also picked up about 11,000 cubic yards of commercial debris.

Smallwood, upon questioning by Councilman Tom Malik, also explained the company’s daily procedure. Malik had heard complaints that some houses with debris out front were bypassed in favor of others during the pickup process.

Smallwood offered several explanations, including time of day, which might not allow for all houses on a particular street to have debris picked up at the same time. He pointed out once assigned to a particular street, the driver of the truck stays on that street until all of the debris is cleared, thus squashing the notion that some houses are purposely skipped.

“We won’t put the driver on another road until the road he is on is finished,” he said.

However, Smallwood pointed out that on occasions some smaller loads might be bypassed until a second trip when those loads can be consolidated for added efficiency.

“All pickups are done with purpose,” he said.

Smallwood said drivers typically see surges in debris pickup on Mondays and Tuesdays after residents have been able to spend the weekend cleaning out or even gutting their homes. Typically, three passes are required on each street before all of the debris is picked up, since not all residents are putting out their debris at the same time.

In fact, he said that in some cases some residents might not put out debris even after three passes.

“Debris will be cleared all through FEMA reimbursement. We will be here until the last stick is picked up, for as long as you want us,” he said.

Smallwood noted that since the company did not have many pre-event contracts in the area, St. John is getting the company’s best people.

“I’ve been impressed with what you have been able to accomplish since you started less than two months ago,” Councilman Lennix Madere said. “It’s looking a lot better.”

In other council news, Capital Projects Administration said the parish community center has been severely damaged after taking on a lot of water.

He said no timetable has been established as to when it might be operational again.

In her president’s report, Jaclyn Hotard gave an update on temporary housing in St. John Parish.

She said 686 residences will be inspected by FEMA to determine if residents are eligible to receive temporary housing. As of this week, 80 trailers are in process and six have been placed in the parish.

Hotard encouraged residents to contact FEMA or the state regarding temporary housing, which might include trailers or hotel rooms. Residents can visit idashelteringla.com for information from the state.

In other hurricane recovery news, Hotard said 1,738 blue roofs have been installed in St. John Parish, and approximately 18,000 individuals have registered with FEMA.