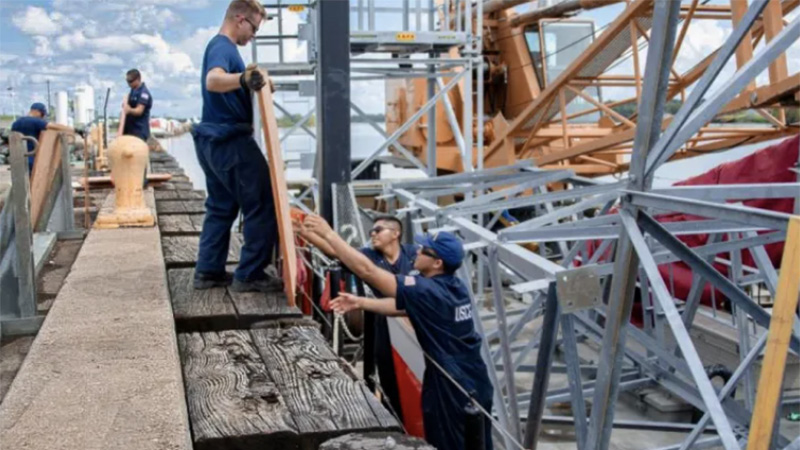 For almost two hours Louisiana’s seafood leaders from all sectors of the industry gathered via Zoom, mobile phones at restaurants or in cars, and in a conference room in Baton Rouge to discuss the damage of Hurricane Ida’s wrath on the State’s seafood industry.  The consensus; the hurricane laid a path of destruction that has crippled almost every sector.

“It is pretty bad,” said Louisiana Crab Task Force chairman Britney Breaux.  “Bayou LaFourche is completely destroyed.  The docks are completely gone, 47 boats have been sunk and there is no ice or clean water. The bayou is filthy and littered with trees everywhere.”

“The purpose of this task force is to help the seafood industry recover from this historically damaging storm,” said Harlon Pearce of the Gulf Seafood Foundation.  “Twenty years ago after Hurricane Katrina we formed a similar group.  Our purpose today is to replicate the success we had then.”

Patrick Banks, assistant secretary of LDWF Office of Fisheries, set the agenda and took the lead to ensure every representative had time to present the issues facing both short and long-term recovery.

“There will be some funding available from the recently passed Fishery Resource Disaster Improvement Act, but that funding is not exclusively targeted at Louisiana,” he told the group.  “Currently there is no declared Fisheries Damage Assessment for Hurricane Ida.”

“It is going to be a long time till they return to how they were before,” he said.  “Until then our customers are going to have to limit their expectations on what to expect.  Camps have been destroyed, there is a lack of lodging and the coastal waters are filled with debris.  It is going to take an effort on everyone’s part to come together.”

Alex Johnson of the American Shrimp Processors’ Association said, “The Gulf is littered with boats and telephone poles.  Shrimp boats have to dodge debris.  There is no doubt there will be a maritime fishing accident sooner or later.”

He explained that Ida had left many shrimp processors deciding on the feasibility of reopening. “There are many players in the industry that probably will choose not to come back.”

Debris is also an issue for oystermen.  The storm left both state and private oyster reefs covered.

“Almost every oyster growing area in the state is covered with debris,” said Mitch Jurisich, chairman of the Oyster Task Force.  “Unlike our brothers 20-miles to the east, Ida’s path left the majority of our boats and docks standing.  Until we get the reefs cleared we cannot harvest.   Those reefs have to get cleared so our fishermen can get back to work.  After Katrina it took almost seven months until the first oysters were harvested.”

An hour into the meeting a clear trend was emerging.  Louisiana’s seafood industry, and others that depend upon it, was in trouble.  For finfish representative Kyle Lamb it was power and water; for Ben Landry of Omega Protein it was compensation at an equitable rate; and for Acy Cooper of the Louisiana Shrimp Association it was immediately finding money for fishermen that have lost their homes, boats and are reeling with hurt.

“We have a lot of intelligent people on this call to help move our industries forward, said Andrew Blanchard, Shrimp Task Force chairman.  “It is going to take some time to bring us back from the brink.  Our biggest challenge now is how to get the money needed and then properly appropriate the funds.”

“We need to get a dollar figure on the damage before we approach our State representatives and those in D.C.,” he said.  “Fisherman, charter fisherman, recreational fisherman, and seafood processors need the questionnaire. We then need to request a U.S. Congressional Field hearing to be held within the state. Then follow up with all of the parties to go to Capitol Hill to show support for the need for Federal Disaster Assistance. We have to be prepared so we can explain to them exactly what is needed.”

For Dr. David Veal of the American Shrimp Processors’ Association, there have been too many disasters, both natural and man-made.

“It’s time to get our processing facilities out of the flood zone,” he told the group.  “We need to explore funding from climate change legislation being debated in Congress.”

The meeting included a longtime friend of the Louisiana fishermen, a representative from Shell Oil.  After Hurricane Katrina Shell was instrumental in securing the funds to rebuild destroyed icehouses.  Joni Tuck said her company looks forward to working with the group as it goes forward.

Ewell Smith of the Gulf Seafood Foundation emphasized the importance of getting their stories told with a unified voice.  “The news cycle moves quicker than it did during Katrina 20-years ago,” he told Gulf Seafood News.  “If we don’t continuously tell our story, get it out across the nation, we will be forgotten, especially by those we need to keep informed the most.  Those in Congress and the White House.”

“The purpose of this meeting was to understand the damage and discover what is needed by the various participants to move forward,” said Harlon Pearce.  “It is imperative that Congress understands clearly and distinctly what is needed.  We will eventually head to D.C. as well as try to to bring Congress back to the bayous to see the damage first hand. With luck even bring the White House.”

“This has been a unique opportunity for all of us to band together to rebuild our coast,” said Jim Gossen of the Gulf Seafood Foundation.  “Fishermen, docks, processors have all been affected, but also those that complement our industry.  Marina’s, bait dealers, charter boat operators, hotel operators and restaurants all are hurting.  We all make our living from the Gulf, we must all work together to ensure that continues.”