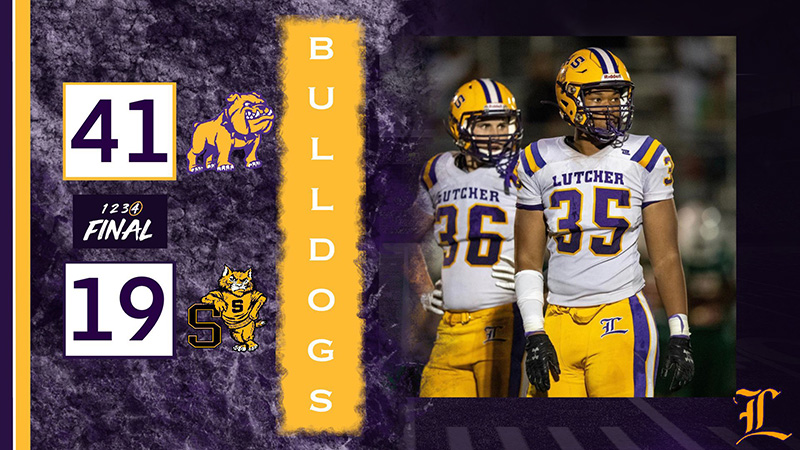 VACHERIE — The rivalry between the St. James Wildcats and the Lutcher Bulldogs is one of the biggest River Parish rivalries and was not a disappointment in the least.

The Dogs traveled to Vacherie to try to gain bragging rights this year and redeem themselves from a catfight last year which ended close, but in a loss for Lutcher by three points. This time, Lutcher started off on fire as they scored two touchdowns in the first quarter. The Bulldogs kept the Wildcats from scoring and the first quarter ended with the Dogs on top, 14-0.

The Lutcher Bulldogs came into the third quarter with the same energy they started the game, making the Wildcats work hard to make stops and decrease yardage. St James’ Daniel Jupiter finally put the Wildcats on the board with a touchdown, 6-0 but the extra point was no good. The Wildcats came back and challenged the Bulldogs defensively when they blocked a punt and scored again, which made the score 28-12. But penalties hurt the Wildcats and the two-point conversion was no good. More penalties continued to haunt the Wildcats and gave Lutcher yards and more opportunities to capitalize.

Lutcher scored again, which made the score 34-12 after the extra point was no good. Lutcher got another break with an interception late in the third quarter and ended the quarter with the ball and the score of 34-12 over the Wildcats.

The combined forces of Lutcher’s offense and defense showed everyone who dominated the rival game this year. The game ended with the Bulldogs on top this year with a score of 41-19. Outstanding play was seen from D’Wanye Winfield, who finished the night with five touchdowns. It was a very good night for both teams.