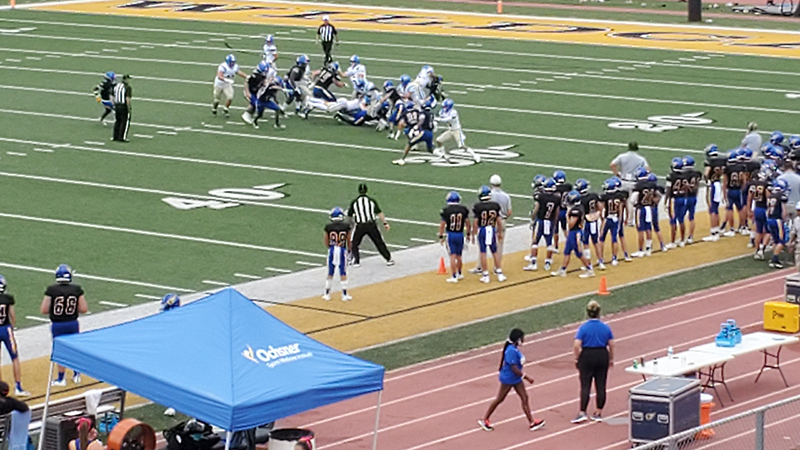 RESERVE — A drizzly Saturday afternoon did not stop the St. Charles Catholic Comets from playing a great game of football, as they defeated the Vandebilt Catholic Terriers Saturday in Joe Keller stadium.

Although displaced by Hurricane Ida, the Comets came to Reserve with one thing in mind: winning. The Comets went to work immediately as Davon Sturgis scored the first touchdown with a 95-yard kickoff return, putting the Comets on the board with 7 at 11:46 minutes in the first quarter.

The Comets continued to strike in the first quarter with a 15-yard touchdown by Ayden Authement at 6:23 followed by a one-yard run by Zack Vicknair at 4:47. The Comets, after having a very exciting first quarter, still fought hard to keep the Terriers from scoring. The defense came up with several sacs to keep the Terrier offense off the field. However, Vandebilt managed to score a touchdown and extra point with 2:45 left in the second quarter. The first half ended with the Comets on top, 21-7.

The second half was a power struggle of defenses as the Comets tried very hard to keep the Terriers from scoring again. The Terriers managed to capitalize on a SCC turnover and scored another touchdown off a pass with 3:18 left in the third quarter, which made the score 21-14 with the Comets on top at the end of the third quarter.

The Comets came into the fourth quarter determined to win and with 8:22 left, Carter Chauvin kicked a 39-yard field goal to make the score 24-14. Although Vandebilt fought a hard fight, they were no match for the Comet defense, which amassed several sacs to ensure the Terriers would not score again.

The Comets held fast and stayed strong, which allowed them to walk off the field with a victory. The final score was St. Charles Catholic 24, Vandebilt Catholic 14.

According to the Comet’s schedule, they will venture away Friday night, October 8, to play Lakeshore. Good luck to the Comets and congratulations on an extraordinary win this week! We extend our prayers to the Vandebilt Catholic family who lost one of their own, Coach Charlie Cryer, last week.