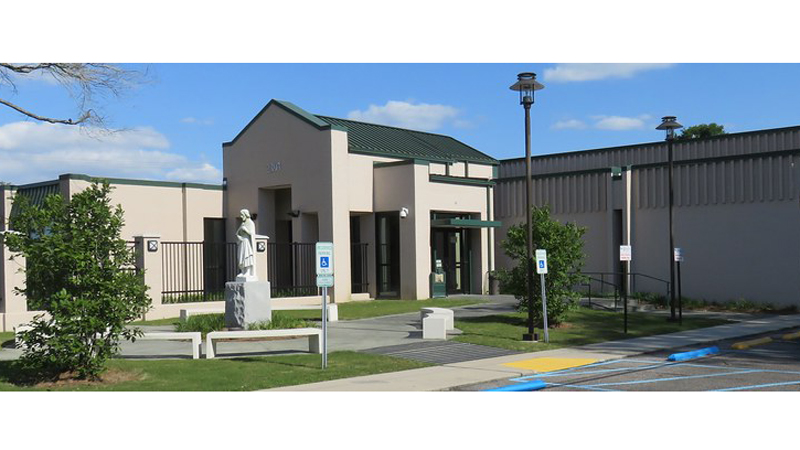 The Edgard Courthouse, also called the 40th Judicial District Courthouse, is located at 2393 Highway 18 in Edgard.

EDGARD — The Parish Council approved a resolution affirming the town of Edgard as the Parish Seat for St. John the Baptist Parish Tuesday night, with some members expressing their desire to see a new, modernized courthouse on the West Bank.

District One Councilman Kurt Becnel introduced the resolution to clear up confusion and show his commitment to Edgard as the Parish Seat. The Parish Seat has historically been located on the West Bank of St. John. It was initially established in the village of Lucy in 1807 and was relocated in 1848 to Edgard, where it has remained ever since. The current courthouse was constructed in 1967.

Recognizing that the Edgard Courthouse sustained roof damage during Hurricane Ida, Becnel said, “Hopefully, with this resolution, we can have an open dialogue to a path moving forward. Hopefully, this leads to major renovations to the existing courthouse or even the construction of a new one, dare I say, in the near future. You never know.”

While District Five Councilman Robert Arcuri recognized the historical significance of the courthouse’s location on the West Bank, he said a majority of constituents would likely prefer an East Bank courthouse.
“The parish was originally inhabited on the West Bank. That being said, I believe 90% of our population lives on the East Bank now,” Arcuri said. “If you talk to the people in this parish, probably 80% of them would say they’d like the Parish Seat to be on the East Bank.”

Councilman At-Large Lennix Madere was not concerned about the convenience of the court. He added that LaPlace is overrun, without much room to expand without cutting into wetlands.

According to Madere, the West Bank has more empty land and potential for growth.

“If we want to ‘build better’ anywhere, then that’s on the West Bank,” he said.

Parish President Jaclyn Hotard supported Edgard as the Parish Seat, and she agreed that the resolution could pave the way to an improved courthouse.

“I would also like to have a new courthouse. I believe our courthouse is historic, and it served a purpose, but like any age facility, it lacks something,” Hotard said.