Hotard stands with insurance commissioner’s Directive 218: Loss of use claims must be paid 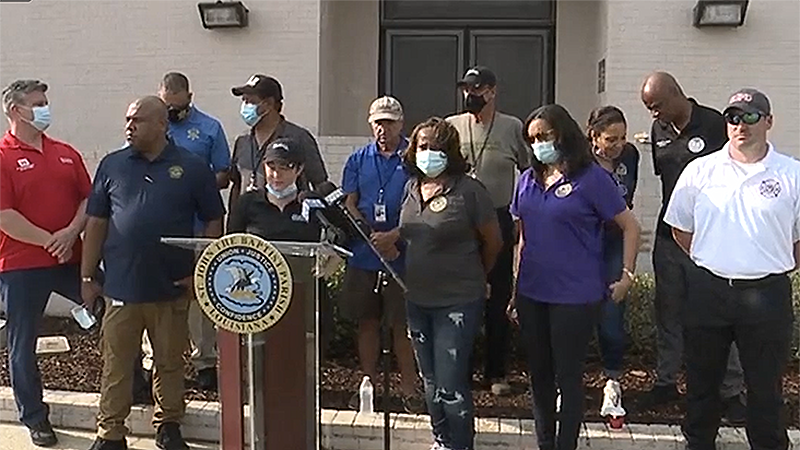 A press conference was held in St. John the Baptist Parish Thursday morning to provide updates on Hurricane Ida recovery.

LAPLACE — St. John the Baptist Parish President Jaclyn Hotard stands with Insurance Commissioner Jim Donelon’s Directive 218, which requires insurance companies to pay loss of use claims for policyholders who evacuated or who were prohibited from using their premises due to Hurricane Ida.

The order covers policyholders residing in parishes, such as St. John the Baptist, that did not issue a formal mandatory evacuation order.

Donelon initiated Directive 218 on Tuesday in response to State Farm stating it would not pay loss of use claims where no express civil authority order was in place.

During a press conference in LaPlace Thursday morning, Hotard said evacuation orders, whether mandatory or voluntary, have a fundamental purpose to save lives.

St. John Parish officials chose to issue a voluntary evacuation order and open a shelter for residents who needed a safe place to stay during the storm.

“State and parish mandatory evacuation plans call for buses to transport evacuees without the ability to do so on their own. With the limited amount of time that Ida gave us, there was no way that we could safely implement a mandatory evacuation plan. In fact, lives could have been lost trying to do so. Being gridlocked without contraflow could have proven to be deadly,” Hotard said. “You must ask yourself after the decision, did anybody die because they could not evacuate or did not have a safe place to shelter? The answer is no, so we made the right decision.”

She continued, “I’m so glad that the insurance commissioner is now forcing those policy holders to pay for our residents’ loss of use because they know that the decisions we made were for life and death…. Now, leaders around the region can continue to place safety above all, make the best life or death decisions, and know their residents will not get tripped up in the fine print of their insurance policy.”

After issuing Directive 218, Commissioner Donelon stated, “Hurricane Ida was a clear and present danger to the citizens of Louisiana. Officials throughout the region took to the airwaves to get out the message that people needed to leave or stay in a safe place. Insurers must treat the many diverse actions taken by public officials as an order to leave and pay people who have coverage for their expenses.”

More than 10 days after Hurricane Ida devastated the Bayou and River parishes, damaged infrastructure and lack of power and utilities have kept many residents from returning home. This is especially true for St. John the Baptist Parish.

Hotard announced that, according to preliminary assessments from the Fire Marshal, 20% of all homes in St. John Parish have minor damage, 60% have major damage, and 10% are completely destroyed.

“These are preliminary numbers, but I suspect that as the assessments continue to be completed, those numbers will hold true,” Hotard said.

The Louisiana Department of Insurance is encouraging evacuees to keep receipts for extra expenses incurred after the disaster. According to Donelon, additional living expense coverage pays for housing and food, such as the cost of a hotel room/rental and reasonable restaurant meals if the individual is unable to cook.

Individuals in St. John Parish not covered by insurance should apply for aid through FEMA at disasterassistance.gov or by calling 800-621-3362.

The FEMA Mobile Registration Intake Center will be at 101 Bamboo Road Thursday, Sept. 9 from 8 a.m. until 6 p.m. to help St. John Parish residents apply for assistance. Elderly residents ages 65 and older who need assistance registering with FEMA can call the Department of Health & Human Services at 985-536-4955 from 8 a.m. to 5 p.m. daily.