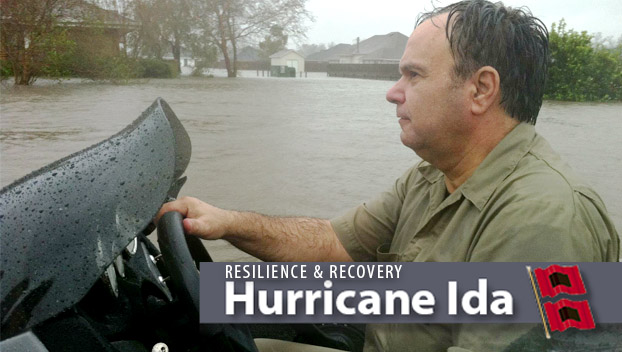 The water didn’t rise; it rushed like a tidal wave.

Vietnam veteran Gene Franques said in less than 10 minutes Moss Street in LaPlace transformed from road to an endless lake.

Water poured into the neighborhood just as it was getting dark on the evening of Aug. 29. Hurricane Ida gave no reprieve as it battered St. John the Baptist Parish with fierce winds, heavy rain and unrelenting storm surge, for hours.

“I thought I was going to die,” Franques said. “I’m talking about a bunch of times.”

Franques was on the phone with St. John Councilman Tom Malik before communications went dark. He explained that water was coming into his house.

Malik explained that the National Guard was unable to perform any rescues until the eye wall passed over the region. But that was hours away.

Once the water was waist deep, Franques knew he needed to get up into the attic.

He rode out the wind storm for the next several hours, lying down on his attic’s wooden floor. His head rested uncomfortably on a workout punching bag, and through a small window all he could see was a blur of white. The noise created by the nearly 100 mph winds was tremendous.

“The wind was so strong, I could feel the house lift and come back down,” he said. “I felt it shifting from left to right. I knew, if that roof comes off, it’s going to suck me out. Those kinds of winds would have just swooped me up. They would’ve found my body somewhere.”

To his surprise, the attic stayed intact through the night as Hurricane Ida’s wrath moved north of the River Parishes and into Mississippi.

He emerged from his attic around 7:30 a.m. Monday morning and found the water had mostly receded from his garage. Outside, he spotted other neighbors who had braved the storm.

The experience was an eye opener and a painful reminder of how vulnerable St. John the Baptist Parish is without levee protection.