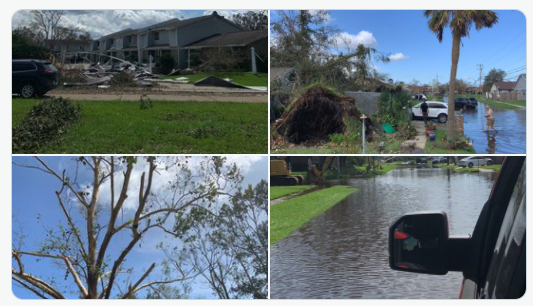 Images and video of LaPlace from social media as area starts the recovery process from the devastating effects of Hurricane Ida:

📍LaPlace, LA 😢 no gas or electricity for miles in this heat, some without water pic.twitter.com/btpw2ImXeS

Our #DART team is currently assessing the impacts of #HurricaneIda in LaPlace, Louisiana. This community outside #NOLA experienced extensive widespread damage including wind damage and flooding. pic.twitter.com/GEDZwuTdHH

The line for gas … Part of it… At one of the first open stations heading downriver out of LaPlace pic.twitter.com/8NRoIoqmmy

Live look at LaPlace from the 10 pic.twitter.com/udqQGaMAZw

Wind damage remains widespread 2 days after Ida passed through Laplace, LA. Residents are returning to their homes and businesses for the first time since evacuating and seeing the damage caused. pic.twitter.com/GQgelEtJMR

In LaPlace, #Louisiana. Some neighborhoods are impassable by car. The water level here is only 6-8 inches. @squishboxphotos at the wheel. @wfaa pic.twitter.com/Lc1OUN2aFL

LIVE NOW | Air 11 is over damage in southeast Louisiana from #HurricaneIda. This screen grab is from LaPlace, Louisiana.

Agents rescued a total of 225 people and 15 pets yesterday in the Laplace and Lafitte areas. Agents continue to be on standby if needed and are also conducting some door to door welfare checks on people in low lying areas. pic.twitter.com/ZOI4nt76Ea

Gov. Edwards to St. John the Baptist residents: We…