Gov. Edwards to St. John the Baptist residents: We are going to be with you for the long haul 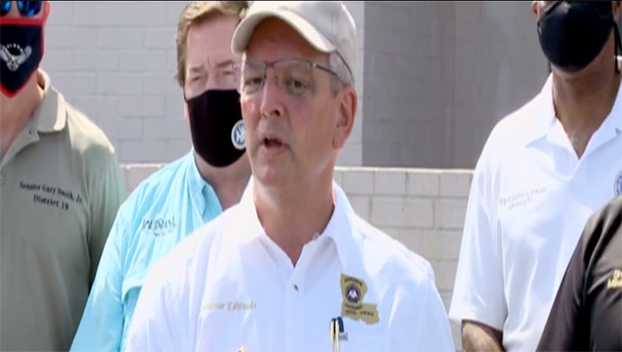 Despite the surge, the winds and the rain, Louisiana Gov. John Bel Edwards said residents of St. John the Baptist Parish and local leaders are “resilient and hardy” and will do what is necessary to come back stronger that ever from Hurricane Ida.

“This storm was every bit as advertised and the damage that we have seen here and that they are dealing with is just catastrophic,” Edwards said. “It was not just surge — you had plenty of that. It was not just wind — you had plenty of that, but some of the heaviest rains that fell in the State of Louisiana (during Hurricane Ida) fell on St. John the Baptist Parish.”

Edwards praised the rescue efforts in the parish Tuesday, stressing the fact that no deaths have been reported, despite the fact that 80 percent of the rescues that were conducted Tuesday were done in St. John the Baptist Parish.

Residents of St. John the Baptist Parish are a “very resilient and hardy people, many of whom have decided not to leave,” Edwards said. “I suspect that will change over the coming days as they find out that their homes are not going to be re-powered any time soon.”

Edwards said he wants to stress to residents in St. John the Baptist Parish and other areas affected by the hurricane that many of the life-supporting infrastructure elements in the area is not operating and will not be operating for a while.

“We have a lot of work ahead of us and no one is under the illusion that this will be a quick process,” Edwards said. “We are going to be with you for the long haul.”

Edwards recommended that people go to where they can find shelter and the necessary elements to live. Edwards said the state has 30 shelter available for those seeking refuge.

The governor said the state is prepared to do what it can to keep La Place and St. John the Baptist Parish safe and secure in the meantime.

The National guard mobilized and additional law enforcement from Louisiana and surrounding states are being called in to provide security, Edwards said.

Edwards said the 911 emergency system is working in the parish.

Edwards asked those evacuated and want to come back to their homes to wait until it is safe to do so. Now is not the time, Edwards said.

“If you have already evacuated do not return to here or southeast Louisiana until the Office of Emergency Preparedness tells you it is time,” Edwards said. “Please don’t come before (officials) tell you it is time.”

The governor asked residents to remain safe during the recovery efforts. The state has 2 confirmed deaths from the hurricane, Edwards said.

“I expect that number will rise,” Edwards said, reminding residents that “most people are killed because of the response, not the storm itself.”

Carbon monoxide, driving through floodwaters, using unfamiliar power equipment, falls off roofs and heat exhaustion are all ways that people have been seriously injured in the past.

“Right now is the most dangerous time.  We are asking people to be patient and to be careful and please be good neighbors,” Edwards said.