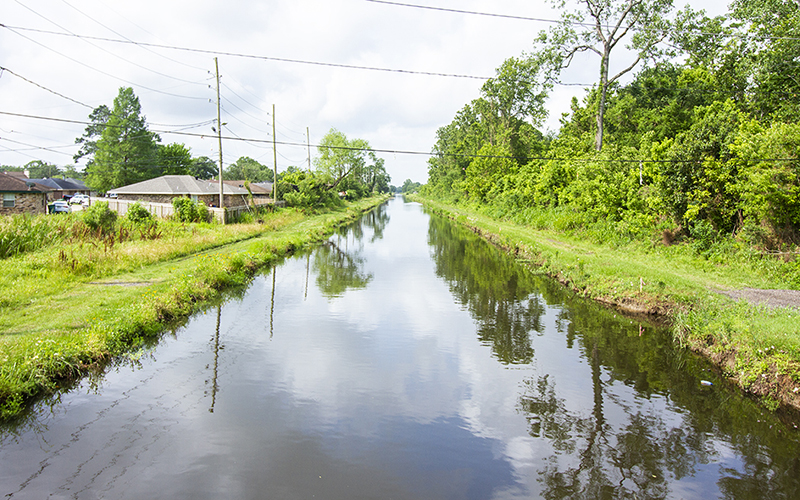 LAPLACE — Residents of Yorktowne Drive attended last week’s Parish Council meeting to express concerns over drainage issues and property damage that have arisen during the dredging of the Vicknair Canal in LaPlace.

The dredging project is intended to remove sediments and debris from the canal, allowing for better flow, flood control and improved drainage in the Cambridge and Riverlands subdivisions.

LaPlace resident Kenneth Jackson said the problem arose when the spoils — the material removed from the canal — were piled up behind Yorktowne Drive. Jackson said the spoils prevented effective drainage into the Vicknair Canal during a recent heavy rainfall event.

“I hope they can take into account how to build the dirt so water rolls into the canal. If they leave and it’s not leveled right to where the water rolls to the canal, it’s going to be a problem and money will have to be spent again,” Jackson said.

Emanuel Brown, another resident of Yorktowne Drive, said the canal work adjacent to his property led to a large portion of his fence being damaged.

A Project Engineer Joseph Savoie said removal of the spoils began early last week, and priority was given to areas along Yorktowne Drive that were experiencing drainage issues in relation to the project. He told the Council that the contractor will do light grading to ensure the surrounding grounds slope toward the canal for proper drainage.

The damage to Brown’s fence has been documented, and there are plans to restore the fence to its pre-existing condition once the spoils are removed.

“An inspector is onsite every day with the contractor. My inspector will go back out and meet again with those residents to ensure that they understand what is going on,” Savoie said.

He added, “For the most part, the residents have been very patient and worked extremely well with us. We do appreciate that because we know this is not an easy process. Unfortunately, due to the nature of the material and the weather we have been fighting, it was not an option to haul it out immediately at that time.”

The spoils, once removed, become the contractor’s property, and it is up to them whether to haul it to other job sites or transport it to a designated stockpile yard.

In other news, the Parish Council voted unanimously to deny an ordinance for the rezoning of a lot in the Belle Pointe Subdivision from Residential One to Residential Three. The rezoning would have paved the way for the development of a three-unit residential building in the area bounded by E. 30th Street, Dupont Road, Chad B. Baker Street and Highway 44 in Reserve.

The Planning Commission recommended approval with a 5-4 vote during a July 19 meeting.

The Parish Council voted to deny the ordinance after several residents of East 30th and East 31st streets in Reserve showed up in opposition of the rezoning.

Speaking on behalf of the group, a resident of E. 30th Street told the Parish Council that her close-knit Reserve community does not want to see the neighborhood change.

She said the property is not large enough to accommodate a multi-unit residential building, and neighbors were concerned how an apartment complex would impact surrounding property values.

“Why would someone want to come in our community and decide that we need to have an apartment complex there? We don’t see a need for it” she said. “The person who purchased that lives in St. Charles Parish, so he has no vested interest in our parish. We are a two-street community. Parking is difficult as it is.”

Councilman At-Large Lennix Madere said some very significant people to the history of St. John the Baptist Parish have come from East 30th and 31st streets in Reserve, including members of the Arceneaux, Cambre, Sanders, Robinet, Keller and Wallace families. The property identified in the ordinance was also of historic significance, according to Madere, because it belonged to an influential educator in St. John Parish.

Councilman Tammy Houston echoed Madere’s sentiments and said she asked Planning and Zoning director Rene Pastorek whether the area could be deemed as a historic site.

When Councilwoman Tyra Duhe-Griffin looks at East 30th and 31st streets, she sees an extended family. The community is home to her in-laws, the neighbor who cared for her as a child, and the hairdresser she still sees today.

“Today, I am standing with my family to deny this application as well,” Duhe-Griffin said.