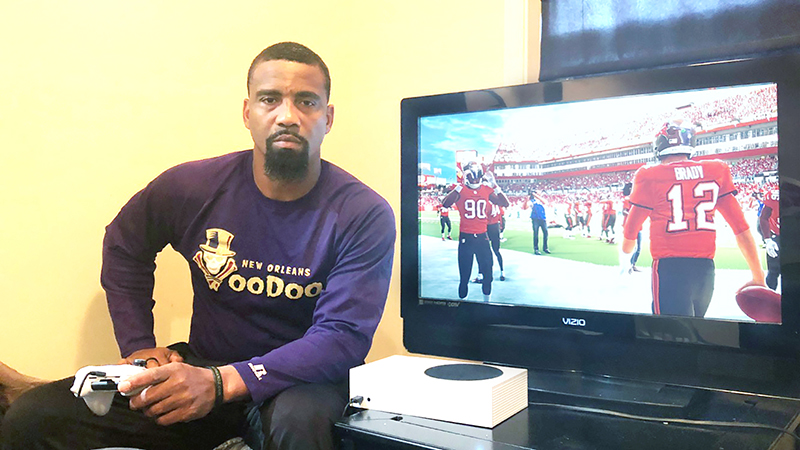 LAPLACE — Parents shouldn’t be so quick to frown on their children playing video games, according to LaPlace native Damon Mason, a Destrehan High School graduate and member of the University of Louisiana at Lafayette Athletic Hall of Fame.

Mason believes video games kept him off the streets and out of trouble when he was growing up in the River Parishes. Now, especially with the push for social distancing with the COVID-19 pandemic, video games have become a portal to scholarships and professional opportunities.

E-sports saw more than a 50% increase from 2020 to 2021 and has become a billion-dollar industry. This year, the International Olympic Committee held its first virtual sporting event series.

Mason is bringing e-sports to the River Region with a competitive Madden football league for students in seventh through 12th grade.

“This is going on all across the country, but not in the River Region. I’m taking this opportunity to bring something to the River Region and use it on a scale that’s never been done before,” Mason said. “E-sports is not something that’s coming in the future. It’s already here. This is already happening.”

Using an X-Box or PlayStation, 32 students will compete in a “mascot league” representing the eight high schools in the River Parishes. Teams will include the Rams, the “E,” the Rebels, the Comets, the Wildcats, the Bulldogs, the Tigers and the Fighting Wildcats.

There will be four students representing each River Region mascot, selected through a tournament style combine after significant time has been given for individuals to register. The winners will earn an official invitation to the team selection draft.

According to Mason, the draft selection order will be determined by random drawing after all 32 students’ names are placed in a bowl. This process will be livestreamed by DM9 Gaming on several social media platforms.

The team selection draft will take place on a separate day. During the draft, all 32 participants will choose their team of choice, and the selections will once again be livestreamed on DM9 social media platforms.

Games will be played once per week. Participants must show good sportsmanship, and trash talking and quitting will not be permitted. The league settings are as follows: Heisman play level, six-minute quarters, fatigue: on, injuries: on, trades: on, fourth down punt rule: 4&1 must punt the ball unless you cross the 50-yard line.

The Mascot League Superbowl winners will have the opportunity to represent Mason’s DM9 gaming brand and compete in official e-sports tournaments.

Mason has also created preseason watch lists for high school athletes in the River Parishes to attract the attention of college scouts. The e-sports league is another way that he can give back to youth in the River Region from a distance, since he now lives in Georgia.

“I’m honored to help them get exposure in a different type of setting that no one from our area ever thought of. You have the opportunity to become a pro gamer or to get sponsors who actually pay you. The only way to get your name out there is to get involved in these tournaments,” Mason said.

Just as in physical sports, e-sports competitors will receive coaching to emphasize the importance of discipline, teamwork, academics and a positive mindset.

“It’s important to implement those same types of life skills. For me, it goes hand in hand with athletics. What you do on the field, the court, the diamond in your respective sport can affect what you do in your community as well. I think e-sports is no different,” Mason said.