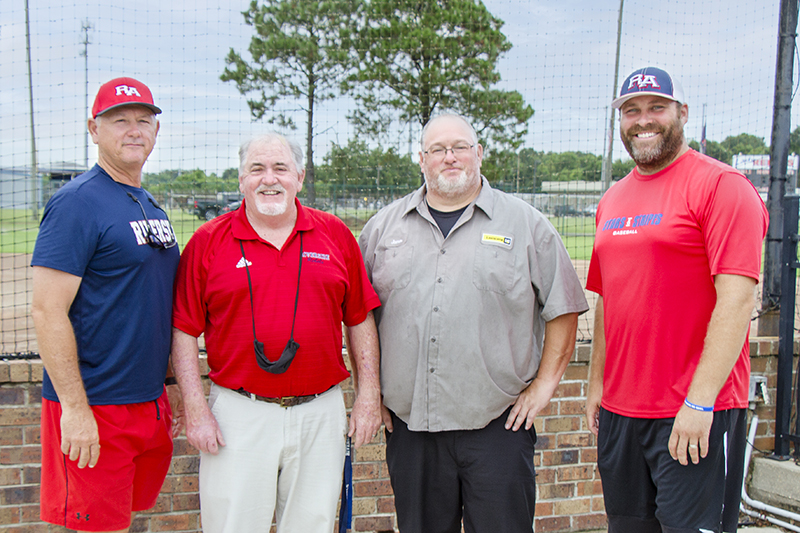 James Brossette, Thomas Diamond and Steven Bourgeois have only been coaching together since last season, but they’ve already formed an unbreakable bond. All three have children attending Riverside Academy, and they are dedicated to changing the culture of the Rebels baseball program.

For Bourgeois, coaching the Rebels means coming home. He played baseball for Riverside as a high schooler and went on to play college ball at Delgado, Hinds Community College and Northeast. He was eventually drafted by the Giants, where he hit over .300 professionally. His strong arm earned him the designations of Texas League Pitcher of the Year, as well as an appearance on the David Letterman Show.

He played professionally for a combined 14 years. Later on, he found himself coaching travel ball for his son. This is the first time he is coaching for a school.

“I always intended on coming to Riverside at some point in time because it’s where I went to school. When Marty came here, it made the decision easy,” he said.

Brossette was using Riverside’s field for his men’s league when he and Luquet started talking about middle school baseball. He was already part of the Rebels family through his daughter, who plays volleyball and softball at the school.

Brossette started playing baseball at 6 years old, and he still plays in men’s leagues today. After graduating from Chalmette High School, he played one year of college ball at Benedictine in Atchison, Kansas. He advanced to the Minor League and joined the Pirates organization for his first two years. During his third year, he played for California, Milwaukee and an independent team in Texas. He’s coached little league, recreation leagues and adult teams for the better part of 20 years.

Brossette knew he was dealing with a talented team at Riverside Academy after last season’s opener against Harry Hurst. The Roadrunners devastated the Rebels the year before, but it was clear the tides had turned when Riverside struck out 15 and kept Hurst off of the scoreboard.

“These kids work harder than any group I’ve ever seen. We would call practice and they would want to go to the batting cage and hit for two more hours,” Brossette said. “I could have the worst day at work, but when I get to that field with them, they have me laughing and smiling the whole time.”

Diamond wants to give young athletes the best experience possible at Riverside Academy. He also brings to the table extensive experience in baseball.

Diamond played at Rummel from 1999 to 2001 before moving on to the University of New Orleans for the ’02, ’03 and ’04 seasons. He played eight years professionally, including seven years in the minor leagues with Texas, Chicago and Minnesota, and one year in the big leagues with the Cubs.

In 2005, he was named the Rangers’ Minor League Pitcher of The Year and received a Topps Minor League Game of the Year recognition. He was also named the All-Star MVP for AAA, the highest level of play in Minor League Baseball.

In his Major League debut, Diamond struck out 10 to tie a 110-year-old Cubs record.

Riverside Academy has always had a strong baseball tradition. Diamond remembers playing against the Rebels when he was in high school at Rummel. Even though RA was a much smaller school, it was always a tough game.

One change Riverside Academy is incorporating next year is opening the baseball program to third and fourth graders.

Luquet spent most of his career in public schools, and it was a pleasant surprise to see how the younger and older students supported each other at Riverside Academy.

“I saw how the high school kids knew the elementary kids already. They were very friendly with each other, and the young ones got excited when they saw the older ones. That breeds the family atmosphere that we have at Riverside,” he said.

The feeling of unity extends to the baseball diamond. Middle schoolers dress in the same uniforms as the older kids, reinforcing the idea that they are all one team and one family.

As Riverside’s enrollment increases with strong new leadership, Luquet feels confident that the baseball program will continue growing in the years to come.