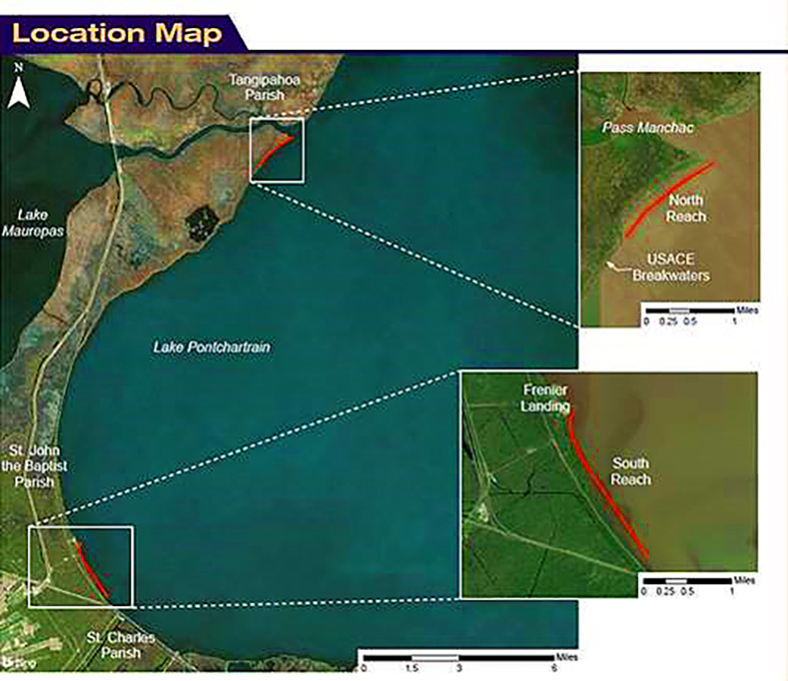 LAPLACE – The St. John the Baptist Parish Planning and Zoning Department will hold a public meeting for the Lake Pontchartrain Shoreline Protection Project at 5:30 p.m. Thursday, August 12 at Frenier Landing in LaPlace.

Light refreshments will be served before the presentation. The public meeting will discuss updates on the Lake Pontchartrain Shoreline Protection Project, which includes the construction of a breakwater system to prevent shoreline erosion and increase protection from storm surge events.

The design phase is currently at 65% completion, and this meeting gives an opportunity for public comment before the Parish submits to federal and state agencies for permitting.

Benefits of the Lake Pontchartrain Shoreline Protection Project include erosion reduction, shoreline stabilization, and sediment accretion and land build-up. The project will connect to existing breakwater features in Tangipahoa Parish.

According to St. John Parish administration, the Western shore of Lake Pontchartrain has eroded at a rate of approximately 10 feet per year since 1915, culminating in roughly 1,060 feet of land lost in the past 106 years. The gradual loss is occurring near the St. John the Baptist/ St. Charles Parish line, extending the length of the shore to Tangipahoa Parish.

In December 2019, HDR Engineering Inc. was awarded a $1,129,129 contract to design a breakwater system strengthening the existing shoreline and preventing sediment erosion. The construction of this project will be funded with a $9.5 million bond issue from the Gulf of Mexico Energy Security Act.

GOMESA was passed in 2006 to aid coastal parishes such as St. John with projects addressing coastal conservation and restoration, hurricane protection and infrastructure relating to wetland loss. St. John Parish received approval for the issuance of $9.5 million in bonds for the Lake Pontchartrain Shoreline Protection Project in Fall 2019.

For more information on St. John Parish’s resilience efforts, please visit  sjbparish.gov/Departments/Planning-and-Zoning/Resilience-Projects or contact the Planning and Zoning Department at 985-651-5565. More information, including annual updates on the Parish’s flood protection outreach efforts, can be found in the e-edition round-up on page 5A and online at lobservateur.com.

Thursday’s public meeting at Frenier Landing will also include information on the status of the Manchac Greenway Master Plan, a new initiative that seeks to improve opportunities for outdoor recreation, eco-tourism and the preservation of wetlands along the Old Highway 51 low road stretching from LaPlace to Akers.

Pastorek said the Treasury has approved an amendment to the plan for RESTORE funds, meaning the Parish is now able to apply to use funding for the Manchac Greenway Master Plan.

Situated on an isthmus formed from natural sediment thousands of years ago, the Manchac Greenway has been home to Native American tribes and colonial settlers. The Cypress swamp played a role in the rebuilding of Chicago after the city was destroyed by fire in the 1870s.

Becnel said Friends of the Manchac Greenway received a grant from Entergy late last year, and plans for the Greenway include improving the safety of a launch site that kayakers use around the 4.5-mile mark. Other plans involve landscaping and beautification efforts.

The Manchac Greenway could be included in a proposed Louisiana Bootlace Trail that would connect existing and future bike trails and greenways across Southeast Louisiana.

Coroner’s report: Virus is back with a vengeance in…