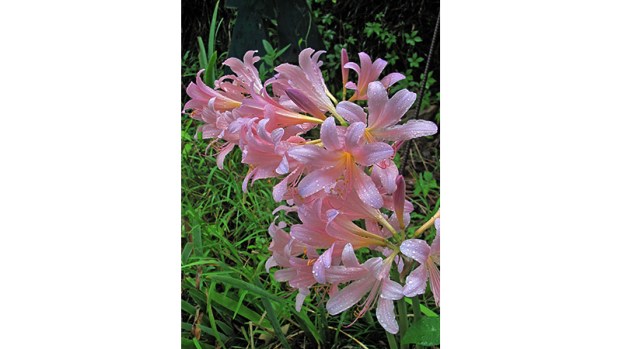 Flowers: What’s in a name?

I’m not the name police; when I get the “What’s this plant called” question, I’m of two minds. Does it really matter that the antique shrub officially named Philadelphus is more commonly called both mock orange and English dogwood?

On one hand, I prefer precise Latin names, but sometimes I just go with what Aunt Mamie calls it. Even when she’s adamant that daffodils are yellow and Narcissus is white, I keep to myself that that Narcissus is the overarching Latin name for all daffodil species.

Here’s another: That common-as-muck spring bulb with flowers of white-with-green dots your mama called snowdrops? Nope, the real snowdrops (Galanthus) don’t flower in Mississippi; what we grow are snowflakes (Leucojum). The name makes no difference to anyone, until you purchase real snowdrops and wonder why they don’t flower here.

Right now it’s all about “naked ladies” which is an heirloom bulb with midsummer clusters of big pink flowers on leafless stems. Polite garden club ladies refer to Lycoris squamigera as either surprise lily or magic lily; its close relative, the later-blooming red “spider lily” (Lycoris radiata), is sometimes called hurricane lily because it flowers after heavy rains in late summer.

Both kinds of Lycoris grow exactly like daffodils: Winter sunshine, not in standing water, and leave the foliage alone ‘til it turns yellow. Lycoris are easy to transplant as soon as they finish flowering, or plant store-bought bulbs by November, so they can get a head start on winter.

But back to what folks call it. Over half a century before Carl Linnaeus published our current “official” plant naming system, Juliet Capulet seemed just as ambivalent, asking her ill-fated secret lover, “What’s in a name? That which we call a rose by any other word would smell as sweet.”

Standardized Latin taxonomy is essential for horticulturists and people from different cultures and languages to communicate precisely. And yet proper Latin names, which are sometimes actually Greek or English, are themselves occasionally changed; Hosta used to be Funkia. Sheesh.

But amongst gardeners, with some bit of confusion, vernacular names roughly work. As nature writer Richard Mabey put it, “Latin names are fine for textbooks, but the beautiful common names we give to our flora and fauna are part of a shared poetry stretching back thousands of years.”

There are dozens of folk names for dandelions, which itself is derived from the French dent de lion, or lion’s tooth, in reference to the jagged margins of the lance-shaped leaves; I’ve heard its seed heads called dandy-puffs. Ever wonder where lungwort got its folk name? The Doctrine of Signature, dating back thousands of years, held that herbs resembling various parts of the body could be used to treat ailments of those body parts – a pseudoscience that has led to many deaths.

In England okra is called ladies’ fingers; prickly pear isn’t a pear, not all muscadines are scuppernongs, asparagus fern isn’t a fern, tiger lilies are spotted not striped, Rose of Sharon isn’t a rose, and blackberry lily is neither.

Some don’t even make sense. Shouldn’t four o’clocks name be adjusted during Daylight Saving Time? And who in their right mind changed snake plant, a folk name for Sansevieria, to mother-in-law tongue?

Meanwhile, my garden’s naked ladies are showing out as usual. What a magical surprise!

Feeling down in the dumps? Take stock of the optimist in you. You’ll live longer.