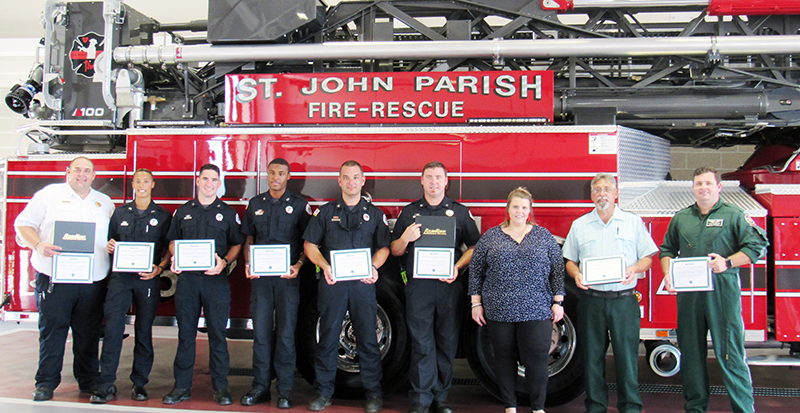 LAPLACE — More than nine months after she was rescued from her vehicle in the aftermath of a crash with an 18-wheeler, Katherine Herbert wanted to thank the first responders who saved her life.

Representatives from the St. John the Baptist Parish Fire Department and Acadian Ambulance were recently honored during a ceremony at Station 51, located on Hemlock Street in LaPlace. Herbert and her family expressed their gratitude to the St. John Parish firefighters, Acadian Ambulance crew members and Acadian Air Med flight crew members that responded to the accident scene on Oct. 6, 2020.

Responders arrived on scene to find a head-on vehicle collision between an SUV and an 18-wheeler. Herbert, the driver of the SUV, was trapped alone inside her vehicle and had sustained significant injuries.

First responders worked together to successfully extricate Hebert from the vehicle. Once safely removed, Herbert was airlifted to University Medical Center for further treatment.

“You don’t always get to see the outcome of the patient after the fact, especially from our side of it,” Morris said. “Being able to see the patient and how she recovered and being thanked by her and her family is a big deal to the crew members. Usually, they don’t get that response, and they don’t get the follow up to find out what happened. It really is a nice thing to get recognized and thanked by your patient.”

Herbert said the firemen at St. John Parish Station 51 and the responders from Acadian Air Med and Acadian Ambulance are forever her heroes.

“I want you to know that everyday I think of you. I know this will continue on for the rest of my life, for you are the reason why I am able to experience meaningful moments once again,” Herbert said. “On Oct. 6, I was looking forward to going home, watching Netflix with my dog, Marley, and working the following day. In an instant, my life changed. But each of you were there and worked so hard to not let me succumb to my injuries. You worked tirelessly to save a stranger.”

She added, “These days I try to appreciate family more, and my favorite part of the day is watching the sunrise on my drive to work. Thank you, from the bottom of my heart, for being a part of my continuing story and for giving me a second chance. You saved my life, in more ways than one.”

“We don’t do this for the glory or to get our name in the paper. There’s a lot of training that these men and women go through to be of excellence. We think we are one of the best in the area as far as extrications and rope rescue,” Hamilton said.

The St. John Fire Department often responds alongside Acadian Ambulance, whether it is a medical call to a residence or a vehicular accident on the highway. Firefighters undergo months of emergency medical responder and emergency medical technician training at the station, and they are prepared to save a life at a moment’s notice. They prepare for calls of accidents with entrapment through in-house extrication classes, where they are trained to use hydraulic rescue tools.

With the COVID-19 pandemic still raging, Hamilton said 75 to 80% of calls the Fire Department is getting right now deal with medical response. The department received 1,941 calls during the year 2020, averaging 162 calls a month for all situations including structure fires, medical calls and accidents. Firefighters have responded to 1,201 calls thus far in 2021.

Yet, recognition is rare, according to Hamilton. It was a surprise when Herbert and her family wanted the first responders to be honored for their lifesaving efforts.

“This means a lot to them. It’s a big morale booster. It just shows that people really do care about what we do,” Hamilton said.

The St. John fire stations are open for tours, giving community members a chance to meet the firefighters and explore the fire trucks.

For more information about these community outreach programs, visit www.sjbparish.gov/Departments/Fire-Services/Community-Programs or call 985-359-0440.