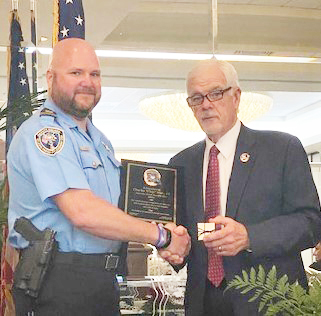 Lt. Wale received this prestigious award for his heroic actions, exhibiting a life-threatening act of bravery in the early morning of August 16, 2012 when he responded to a chaotic gunfight at a trailer park where a group of self-proclaimed sovereign citizens killed two St. John the Baptist Parish deputies and severely wounded another.

Sheriff Mike Tregre had to wait until the trial of the killer was concluded to nominate Captain Wale for the valor award due to the sensitivity of the case and to protect the integrity of the investigation.

In addition, last year Captain Wale gave exceptional testimony during the trial of the killer, helping prosecutors piece together the events that led to the murder of the two deputies, and ultimately leading to the suspect’s conviction and sentencing to death.