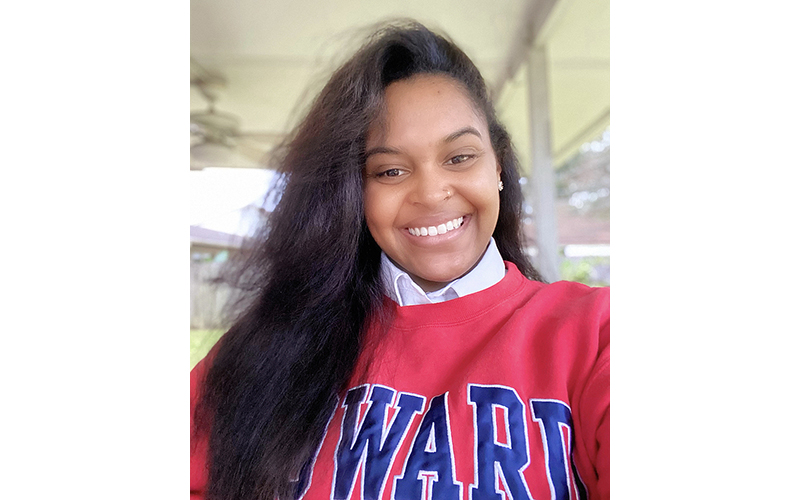 LAPLACE — Growing up in St. John the Baptist Parish, Kennedy Gerard didn’t realize that going to the doctor was luxury not everyone could afford. As she got older, she became inspired to make a positive change in the healthcare field.

Gerard is now graduating from Howard University one year early and preparing to attend law school at the University of Mississippi. Her goal is to become a public health attorney who can fight for healthcare equity for all.

Gerard attended LaPlace Elementary School from kindergarten to eighth grade prior to relocating to Texas with her mother. Before graduating from high school in 2018, she was selected to be part of a specialized medical science academy and gained firsthand experience in the medical field as a nursing intern at MD Anderson Cancer Center. She was one of only four Black students out of 40 participants in the program. Gerard additionally served as the vice president of the National Honor Society and the president of Health Occupations Students of America during her high school career.

“Doing the specialized medical program made me realize I did not want to work directly in the medical field. At Howard, I choes to study political science and minor in maternal and child health education because I wanted to look at policy as it related to healthcare,” Gerard said.

Gerard will graduate from Howard University, Washington D.C. on July 25. She’s had a full college experience in three years, even through the trials of the COVID-19 pandemic.

Gerard currently serves as president of the Howard University Student Ambassador Program, through which she has given campus tours and planned in-person and virtual events for prospective students. She was interviewed by U.S. News & World Report for her involvement in the ambassador program.

Gerard also wrote for The Hilltop Newspaper at Howard, as well as Her Campus, a national collegiate women’s magazine. She is a Spring 2021 initiate into the Howard University pre-law chapter of Phi Alpha Delta Law Fraternity International, which has notable members including Joe Biden, Johnnie Cochran and Ruth Bader Ginsburg.

Exploring Washington D.C. was one of Gerard’s favorite pastimes prior to the start of the pandemic. Upon returning home for virtual learning, she knew she needed to come up with a plan for the remainder of her undergraduate and her post-graduate career.

“I realized I wouldn’t be on campus for a while, and I knew there would be limited housing in Washington D.C.,” Gerard said. “That’s how I got to the point of wanting to graduate early as a financial decision.”

Starting last August, Gerard embarked on a six-week stretch of intensive study for the LSAT while balancing 21 credit hours and recovering from a COVID-19 infection. She experienced several technical difficulties while taking the exam, and she doubted that her score would be strong enough for admittance into law school. Her advisor encouraged her to apply anyway, and she was taken aback by the response.

Gerard ultimately chose to continue her studies at the University of Mississippi. She was initially hesitant given the school’s history involving racial relations, but visiting the campus gave her a new outlook that solidified her decision.

“It was a very genuine atmosphere. I felt like was at home. It felt like everybody was my family, and everyone had my best interest at heart,” Gerard said.

Gerard would like to see more people of color pursue higher education, and she does her part by educating high school students on the college admissions process. She’s also served as a pre-law mentor at Howard University.

Apart from her school professors, Gerard has looked up to her uncle who works as a lawyer. She is also inspired by the Honorable Nghana Lewis, who currently serves as the Division B Judge in St. John Parish.

Lewis has enjoyed watching Gerard blossom into a successful, driven young woman. Her mother, Kennette Bardell, and her father and stepmother, Germond and Taraya Gerard, have shaped the person she is today.

“Kennedy hails from strong families with deep roots in St. John the Baptist Parish – the Bardells and the Gerards,” Lewis said. “She is a shining star who has already demonstrated excellence in academic achievement as a student at Howard University. I was extremely pleased to learn that she chose Ole Miss to pursue her JD because it demonstrates her commitment to the South as a bastion of opportunities for professional development and success in a culturally-enriched, family-oriented, nurturing environment.”

Lewis added, “I look forward to witnessing this young woman continuing to evolve into a consummate professional, due in no small part to the solid foundation she received from growing up in a loving and supportive family and community.”