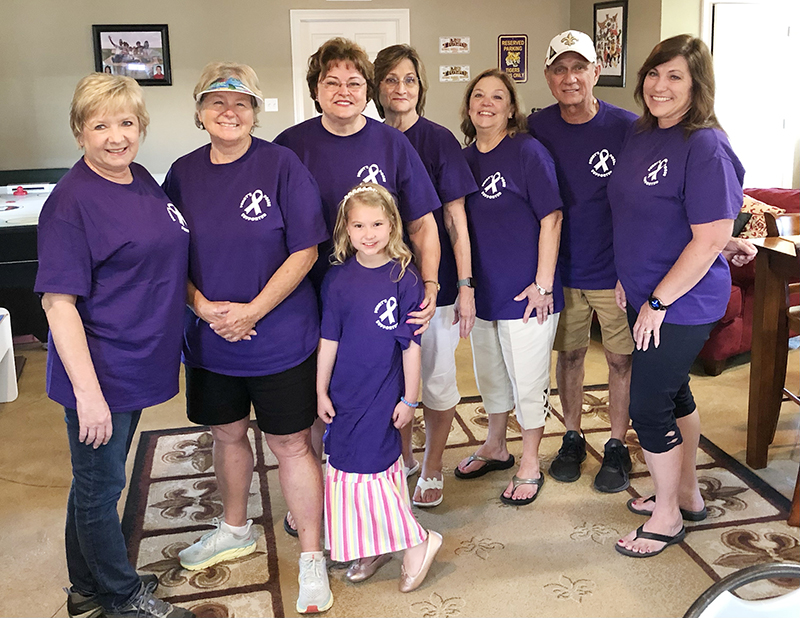 GARYVILLE — Given the choice between receiving birthday presents and donating to a charity, 8-year-old Lilly Graves opted to collect money for local nonprofit Perry’s Posse to benefit active cancer patients in the River Parishes.

Lilly was named an official member of Perry’s Posse at a meeting last week in Garyville after she presented members of the organization with more than $500.

During the meeting, Lilly received a gift bag full of items that are included in the initial packages sent to cancer patients. Lilly also wanted to purchase a gift for one of the youngest cancer patients. Perry’s Posse members pulled names and selected 5-year-old Braylee from St. James Parish to receive a gift from Lilly.

Lilly had the opportunity to FaceTime Braylee to show her the Disney game she purchased. Perry’s Posse members will deliver the special game to Braylee’s family.

LeBouef said Lilly was very shy and quiet at first, but she opened up throughout the meeting. The entire group was enchanted by her sweet nature and willingness to give.

“We appointed Lilly an official Perry’s Posse member and told her she is a hero to so many and a great inspiration,” LeBouef said. “I told her I will think of a super hero name. She said she will be Captain Lilly.”

LeBouef added that Lilly is an amazing little girl who is being raised right. This birthday fundraiser is not the only act of kindness her family has been involved in.
Lilly’s first donation drive was held during a joint birthday party the year she turned 6, according to her mother, Avery Graves.

“This year, she wanted to invite friends to an outdoor pool party. I asked her, since she was having a bigger party, if she wanted to do a donation drive instead of getting a bunch of presents. She was all in, and she was so excited to do a donation drive again,” Graves said. “I really love that she is always willing to help other people. I told her she will still get presents from family, and she was so not even concerned with that. She was just excited to be able to do something for others.”

St. Jude was a consideration for the donation drive, since Lilly and her family yearned to join the fight against cancer. After learning about Perry’s Posse, Lilly was excited to help cancer patients locally.

Graves said her daughter is a good friend who strives to make everyone included. She’s as sweet as she is witty, and she can easily carry on conversations with people much older than her. She enjoyed seeing how her donation put smiles on the faces of Perry’s Posse members.

“I think all of the positive reactions from everybody has made Lilly feel so good and happy about doing this, and I think it has definitely encouraged her to keep doing things like this,” Graves said. “I’m glad that she realizes there are people in so many different circumstances and situations. Not everybody is the same, and that’s okay.”