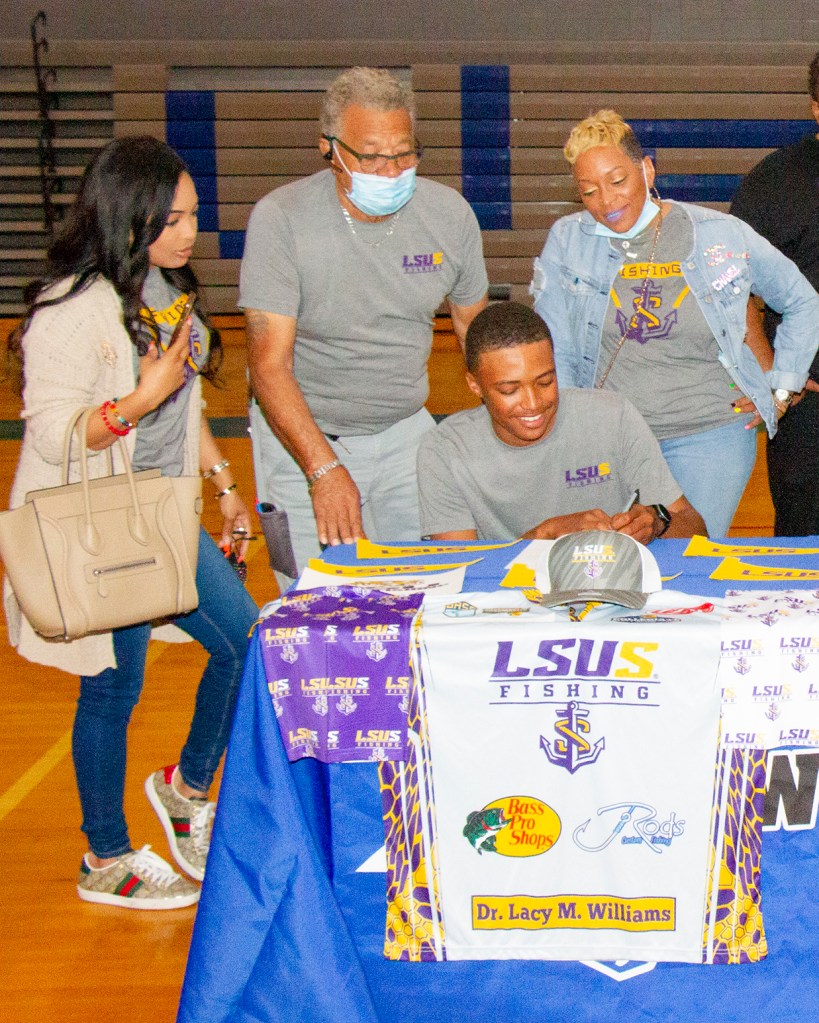 EDGARD — Khristian Rousseve is making history as the first African American student at West St. John and in the River Parishes to attend college on a fishing scholarship.

Rousseve committed to Louisiana State University’s fishing team last week during a Class of 2021 Decision Day ceremony in the Rams gymnasium. By signing his letter of intent, he showed his peers that the sky is the limit when it comes to achieving dreams.

Rousseve had a choice to make between college offers from LSU and the University of Arkansas at Pine Bluff.

“I chose LSU because they have a great fishing program,” Rousseve said. “I joined the fishing team at West St. John in 2017, my freshman year, but I’ve been fishing since I was young. I enjoy seeing the outdoors, getting to see nature and spending time with family.”

Rousseve said God and his parents, Matthew and Dana Rousseve, have been the biggest influences in his life. His love for fishing began at age 5 when his father took time to teach him the sport, and that passion has flourished in the years since. Matthew Rousseve has been by his son’s side at every tournament.

Under the direction of Coach Vernon Silver, Rousseve has had top 10 finishes throughout the 2020-2021 fishing season. He took home a win in the 2020 Louisiana High School BASS Nation West Winter Qualifier out of Big Bass Marin in Toledo Bend, in addition to earning second place in the Eastern Division Qualifier at Doiron’s Landing in Stephensville.

Rousseve has also qualified to compete in two national competitions. The Fishing League Worldwide tour will be held at Lake Hartwell in Anderson County, South Carolina, while the high school bass fishing championship will take place at Lake Chickamauga in Chattanooga, Tennessee.

Rousseve looks forward to obtaining a degree in finance at LSU while striving to one day qualify for the Bassmaster Classic.

“He’s doing well. He’s really embraced the sport, and he loves it. We’re glad to be one of the pioneers in that sport,” Walters said. “Bass fishing is an alive and running sport at West St. John, and we have some underclassmen still carrying the flag. The future is bright.”